Everyone’s favorite time of the year is the period before Christmas‚when the air is filled with joy‚ peace and expectation. We are blessed to live in a country that looks forward to Christmas although we might seem to have lost some of its meaning along the way.  We have radio stations that air carols without ceasing‚ exalting the season‚ although many of them speak about snow‚ jolly figures carrying gifts‚ family time and other things that are all fine‚ but missing maybe the point of all this festival. It is wonderful that everyone celebrates Christmas‚ in their own way‚ and even people that don’t believe in God enjoy the season and try to be “good for goodness’ sake”‚ as a recent billboard from our atheistic friends reads recently (we can discuss some other time about the origin of Good). 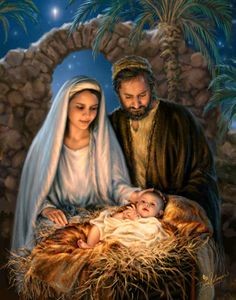 One of the Christians staples of the pre-Christmas period is the Nativity Scene that adorns most churchyards and many of the lawns in our neighborhoods. People count on these scenes to convey to the world the true meaning of Christmas although every year they seem to be the object of national debate‚ as our world moves more and more towards political correctness‚ and less towards mutual respect for everyone’s beliefs. But I might be digressing…

The Nativity Scene strives to portray the ideal Christian family on a backdrop of simplicity and humbleness.  The perfect “Baby Jesus” is born in a loving family with a Holy Mother and a loving adopted father casting a caring arm around those he was called to protect. The angels sing‚ the magi come with gifts‚ the shepherds praise and even the animals care of the Newborn with their warm breath.  Christ is welcomed in the world with joy and is surrounded by love. All Creation gathers at the manger of Bethlehem in perfect harmony to glorify the Incarnation of the Son of God.  All is more than perfect. Is this however the true story of Christmas?

Looking for other sources of inspiration I recalled a similar tradition from my home country Romania where the priest brings the icon of Nativity in everyone’s homes singing the troparion of the Feast. It is‚ if you want‚ a reversed pilgrimage where Christ comes and visits you where you are‚ in your house‚ an icon of the Incarnation of God in itself‚a reenactment of His coming to earth where we are at home. 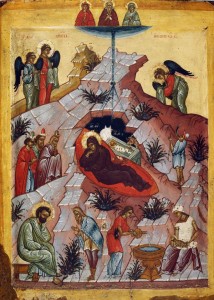 Analyzing the Nativity icon in its Orthodox Byzantine rendering‚ we see an interpretation that is not as idealistic as a Nativity Scene.  We see a Christ born in a cold cave because no one has opened the door for Him. In place of a crib He has to cope with an animal manger so the prophecy of Isaiah will be fulfilled: The ox knows his owner‚ and the ass his master’s crib: but Israel has not known me‚ and my people have not understood. The shepherds do not come on their own‚but an angel gathers them. Joseph himself is not portrayed very flattering‚ as he is represented far from the Mother and Child‚ doubting the whole story‚ conversing with a sinister character that is no other but the devil tempting him. The Virgin‚ now Mother of God‚ is also many times portrayed with her head turned towards Joseph‚ worrying about the state of his soul.

This is the true world in which Christ was born‚ but this imperfect world is the very reason for His coming. Even the ones closest to Him are not perfect and they‚ as well‚ are in need of the salvation He will preach and accomplish by His death on the Cross.  The reality of the Cross is not missing from this icon because the swaddling clothes are also his funeral shroud‚ the manger His coffin and the cave His tomb.  Everything is depicted through the realistic perspective of the need for redemption‚ without cosmetic surgery or idealization. Christ came to save the sinners‚ along with the righteous.

The iconographic detail of the ox and the donkey further illustrates this point. From the Law of the Old Testament we know that the ox was a clean animal while the donkey was not. They are symbols of the chosen people and of the gentiles‚ of those under the Law and those outside of the Law‚ of the sinners and the righteous. Their presence in the icon suggests one more time that Christ has come for all‚ good or bad‚ without prejudice‚ without expectations‚ ready to sacrifice Himself for those that will crucify Him. Father‚ forgive them‚ for they do not know what they do!

Looking at the season through the reversed perspective of the Orthodox icon of Nativity‚ we might grasp a better understanding of the world in which we live‚ with all the things that are plaguing it from all directions. Yes‚ we complain today that the world expects Christ with a generic message‚ that our traditions are void of content‚ that we have lost the meaning of Christmas‚ but when actually was the world ready for the coming of Christ? When He was born in the midst of His own chosen people and they couldn’t care less? When the Christians were persecuted by Roman emperors and thrown to the lions? When the French revolution shouted triumphantly that they would hang the last king with the intestines of the last priest? When the communists have demolished the churches and thrown the priests in the gulag? The world has never been ready for the coming of Christ‚ just as it is not ready now‚ but it is exactly this fact that makes it essential. The unpreparedness of the world underscores the unfathomable love of Christ for His dysfunctional family.

This infinite love should make us all want to change something within our hearts‚ to make our heart a place fit for Christ. To give him there a proper place to be born‚ to grow and to save each of us from the inside out. Then‚ and only then‚ the Christians will truly become a cloud of witnesses for the Incarnation. Then‚ and only then‚ the world will be able to understand the meaning of the miracle from the manger of Bethlehem.

Christ is born!  Glorify Him!

On a bench besides John‚ Mary is also deep in thought. “Hmm… I think I start understanding why I…

Most viewed articles
Should One Marry a Non-Believer?256
For actor Jonathan Jackson, embracing Orthodoxy was not just conversion, it was “coming home”161
Sheep Dog or Guard Dog?146
Life of Saint Paisios to Become TV Series, Shooting Begins in Konitsa, Ioannina85
Turks Expressed “Irritation” due to Cross Placed on Greek-Turkish Border81
St Alexander Nevsky Cathedral in Howell, NJ, Celebrates Its Feast Day50
Homily on the Birth of the Theotokos42
Inaugural Ceremony for 200th Anniversary of the Greek Revolution Commences in Picton33
Priests Leave Church. Archpriest Konstantin Ostrovsky Speaks on How to Live Through It33
Sunday of the Fathers of the First Ecumenical Council1
Most popular authors
Archimandrite Savva (Janich)256
Pravmir.com team249
Ștefana Totorcea161
Archpriest Lawrence Farley146
Metropolitan Sotirios42
Archpriest Konstantin Ostrovsky33