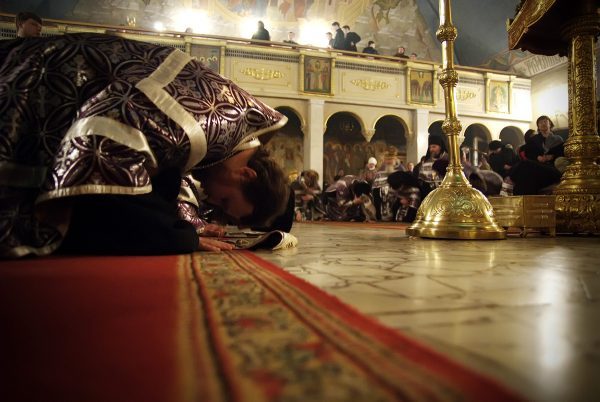 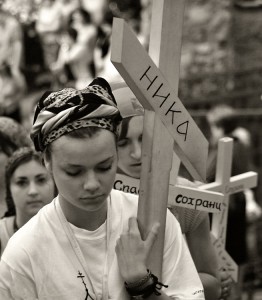 On the fifth Thursday of Lent in the Orthodox Churches we chant the service of the Great Canon of St Andrew of Crete.  It is a monumental work of hymnography with more than 250 odes‚ or verses‚ to which we also add the lengthy reading of the life of St Mary of Egypt. This makes it probably one of the longest services of Great Lent. If one also a counts the number of prostrations performed after each ode‚ it becomes also one of the most uncomfortable services for any casual observer.

But the length of the service and the physical discomfort of the standing and the prostrations is not the only thing that renders people to be uneasy with this service. The canon brings forth like in a truthful mirror the fallen and sinful nature of humankind by extensively referencing examples from the Old and New Testament and linking them back with our own shortcomings. We don’t appreciate this because we have grown accustomed to having a very good impression of ourselves; we were taught by the society to be proud of our achievements and develop a high sense of self-esteem. So even when we look in a mirror we always try to search for the good features‚ not the faults and when someone shows us that we are not as beautiful as we think we are‚ or as smart as we think we‚ or as pious as we thing we are‚  we take somewhat offense in it.

But the Great canon is not the only thing that is uncomfortable in the Orthodox Church; there are many things here that go against the grain off the secular world. Take for instance the iconography. Many times John the Baptist is depicted with a very stern figure‚ looking to us with fiery eyes that seem to say over the centuries “Repent for the kingdom of heaven is at hand!” Many would like to replace this accusatory appearance that calls us to a heightened sense of Christian responsibility with one that would transmits warm and fuzzy feelings‚ even though this is not who St. John the Baptist was. This happened in the West where the thin body frame of the greatest ascetic that lived‚ was replaced with the rounded curves of a well fed body as in the depiction of Leonardo Da Vinci and others. Who cares about historical and theological accuracy when we can have our own happy version of the truth?

The traditional Byzantine music of the Orthodox Church also seems harsh at times to the Western trained ears that are more used with the even tempered intervals of the classical music. But the Byzantine music is not an independent musical system that just happens to be applied to the Church‚ like the Western one is‚ the Byzantine music has grown organically in the Church over centuries‚ in complete symbiosis with the poetry of the prayers and seeks‚ with its intricate and sometimes seemingly strange intervals of its eight modes‚ to adjust to the complexity of sentiments that are stirred in our hearts‚ not by the musical intervals alone‚ but by the very words of prayer.

We also do not praise gluttony and laziness but we practice fasting and constant work towards salvation. Many call this archaic‚ unnecessary‚ optional‚ old fashioned‚ fundamentalist and so on. But looking around in the icons of the Church we see no well fed  and relaxed individuals  but only ascetic figures‚ sharpened by the great works of fasting and spiritual struggle‚ martyrs that have greatly suffered for their faith‚  soldiers that have fought valiantly for the Truth. Isn’t it paradoxical that we want to be united with Christ as the saints are‚ yet we are not willing to follow in their footsteps? We ask their intercessions‚ yet we do not agree with their way of life simply because it interferes with our comfortable living?

The architecture of the Orthodox churches fosters on its turn a degree of discomfort in the congregation by setting its liturgical spaces in such a way that allows participation of the whole body in prayer by long-standings‚ prostrations‚ kneeling and so on. The West has limited this organic and holistic participation in the services‚ albeit at times seemingly disordered‚ by the introduction of well organized rows of fixed pews that add comfort but reduce greatly our involvement in the services.

We can continue all day long with the examples‚ but it is clear that the over emphasis on comfort and “feel-good” Christianity is detrimental to our spiritual life. Christ Himself‚ our archetypal Model‚ has not lived a comfortable life.  He was not comfortable when He was unjustly accused‚ nor when He was hit‚ or when He was flagellated‚ or when He was nailed on the Cross. He accepted it all as necessary means for our salvation. He did not look for it‚ as He prayed for this burden to be lifted from Him in the Garden of Gethsemane‚ but yet He accepted the will of the Father and fulfilled His mission.  Comfort and feel-good were not His priorities‚ but the salvation of the human race.

We are‚ of course‚ not responsible for the entire mankind‚ but yet we are responsible for ourselves on a very personal level. We shouldn’t necessarily go out and seek out suffering and discomfort‚ but when it is part of our spiritual training‚ we should embrace it and learn to use it to transform us‚ to grow stronger and more resilient in our faith.  The Great Lent brings this to our attention better than anything.

The uncomfortable discipline of our Church does not allow us to forget that without Crucifixion there is no Resurrection and without death there is no life everlasting. This is who we are as Orthodox: followers of the Crucified One‚ taking upon our shoulders every day our own personal crosses‚ climbing step after step the difficult path that leads to our own resurrection.

May you all have a blessed remainder of the Lenten season and a joyous and liberating Pascha!