Source: Eastern Christian Insights
Homily for the Feast of the Beheading of the Prophet, Forerunner, and Baptist John in the Orthodox Church (Acts 13:25-33; Mark 6:14-30)
Priest Philip LeMasters | 11 September 2022 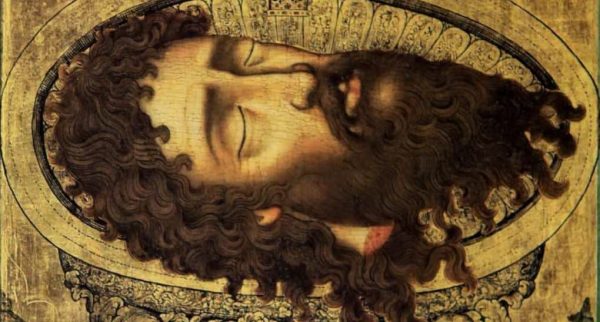 Those who think that religion is about helping people experience warm feelings and become better adjusted members of society will have their eyes opened by the event we commemorate today:  The Beheading of St. John the Prophet, Forerunner, and Baptist.  John was the last of the Old Testament prophets who prepared the way for the coming of the Messiah by calling the Jewish people to repent.  And like many of his predecessors, John did not speak soft or popular words.  He spoke the word of the Lord plainly and powerfully, criticizing all the corrupt powerful groups in Israel and even denouncing King Herod for marrying his own brother’s wife.

Herodias (the illegitimate wife of Herod) wanted John killed for this criticism.  When her daughter performed a shameless dance for him at a party, he promised to give her whatever she wanted.  Following her mother’s wicked advice, the young woman asked for the head of John the Baptist on a platter.  Herod did not want to have John killed, but was afraid that he would lose face if he did not fulfill his promise.  So apparently while the party was still going on, John’s head was cut off and brought in on a plate for everyone to see.

This horrific and obscene story shows the tremendous difference between a life lived in the service of God and one lived in the service of our passions and distorted desires.  John pursued a strict ascetical life all his days, living in the desert, wearing camel’s hair, and eating locusts and wild honey.  He did not marry and probably owned nothing but the clothes on his back.  Through his life of self-denial and prayer, John was prepared not only to prepare the way for the coming of Christ by calling the Jews to repent, but also to baptize the incarnate Son of God in the river Jordan.  John knew that he was not worthy to baptize the Savior, but did so out of humble obedience.  He was simply a voice crying in the wilderness and urging people to straighten up their lives so that they would be ready to receive the anointed One, the Messiah, in whom all God’s promises to the descendants of Abraham were fulfilled.

Herod Antipas was completely different from John.  His father was King Herod the Great who wanted to kill Christ as an infant and consequently murdered all the young boys around Bethlehem.   The younger Herod was also corrupt and divorced one wife in order to marry his brother’s wife.  He basically used his power to steal Herodias and married her even while his brother was still alive.  When John let Herod know in no uncertain terms that such behavior was sinful and immoral, the king was not pleased.  He had John imprisoned, but his wife Herodias wanted the prophet dead out of spite.   And to make matters worse, Herod was so enthralled with passion after the dance of his step daughter that he made a promise that led him to order the execution of this great prophet.

In contrast to all the darkness in Herod’s life, John was a shining example of holiness.  As the child of an aged, barren couple, John was born under miraculous circumstances after the visit of the Archangel Gabriel.  His birth is clearly connected to Christ’s birth and bears certain similarities to it.  And the same is true of his death.  John offended the leaders of his day because of his faithful ministry; like Christ, he was killed by powerful worldly rulers because they did not like what he said and saw him as a threat.   He is the Forerunner who prepares the way for the Messiah not only by calling the Jews to repent, but also as a martyr, as one who laid down his life in free obedience to God.  John the Baptist pointed to Christ throughout his life and even in his death.

His example surely makes us at least a bit uncomfortable, which is not a bad thing.  We probably find his life in the desert and  diet to be bizarre and are surely relieved that a wild and holy man is not naming our sins and telling us to repent.  The Forerunner was not afraid to tell the truth about a wicked king, and neither would he be afraid to tell the truth about our lives.  When people asked him what they should do in order to repent, he did not tell them merely to be sorry for their sins, but to take practical steps that required effort and sacrifice in order to set themselves right in relation to God.  For example, “He who has two tunics, let him give to him who has none; and he who has food, let him do likewise.”  To tax-collectors who wanted to repent of their crookedness, he said “Collect no more than what is appointed for you.”  To soldiers, he said, “Do not intimidate anyone or accuse falsely, and be content with your wages.”

These teachings called people to treat others with justice and kindness, to do unto others as you would have others do unto you.   Contrary to popular opinion, true religion is not about emotion, legalism, ceremonies, or gaining earthly power for any particular group.  The prophet Micah proclaimed similarly, “And what does the Lord require of you but to do justice, to love kindness, and to walk humbly with your God?” (Mic. 6:8) St. James wrote in his epistle, “Pure and undefiled religion before God and the Father is this:  to visit orphans and widows in their trouble, and to keep oneself unspotted from the world.”   John the Baptist was unspotted from the world due to the spiritual strength he gained from a life of asceticism and prayer, and he called people to follow him in preparing the way of the Lord as they bore “fruits worthy of repentance” and treated other people with the care appropriate to the children of God.  Herod knew that John was a holy man, and he had feared and protected him to an extent; but at the end of the day, Herod ordered his death due to his addiction to the passions of lust and pride.  Herod did not bear fruits worthy of repentance, and he surely did not treat John with the love due a neighbor or even with basic justice.

Though obviously in different circumstances, today’s feast reminds us that that we all face the choice of whether to follow the example of John or the example of Herod.   It is the choice between freedom and slavery, between pointing our lives toward Christ or toward addiction to self-centered desire to the point that we will risk hating, and even wanting to destroy, anyone or anything that gets in our way.   Even though the actions we take each day are not as dramatic as cutting off someone’s head and putting it on a platter in the middle of a party, they are no less influential in revealing and shaping our character.  Through our habits, we form our souls either to become more like Christ or more like those who rejected and killed Him and His Forerunner.

The truth is that, if we never get around to repenting, to straightening out our lives and replacing corrupt habits with holy ones, we will never acquire the strength to resist our temptations.  We will diminish ourselves to the point that we will not be able even to imagine living as anything other than slaves to our own pleasures, desires, and agendas.   If, on the other hand, we acknowledge in humble confession how we have failed to prepare the way of the Lord as we open even the dark and crooked dimensions of ourselves to Him, then we will find the strength to follow Christ one step at a time.  In the practical and tangible ways that are available to us, we will learn to serve Christ in our neighbors, especially those in need in various ways.  We may not eat only locusts and honey, but by fasting we will learn that the world will not end if we refuse to gratify every desire.  And then we will experience at least a bit of the great freedom known by saints such as John the Baptist who understood clearly his calling in life and fulfilled it faithfully, even to the point of death.

Unlike those who heard the Forerunner’s preaching and received only his baptism of repentance, we have the advantage of sharing by grace in the life of the One to Whom he pointed.  We have put on Christ like a garment in baptism and are nourished by His Body and Blood in the Eucharist.  How can we not, then, enthusiastically run the race to which the example of this great Prophet points us?  If those who heard his message had an obligation to prepare for the Messiah, how much greater is our responsibility to live as those who have received the fullness of the promise?   Even more than St. John’s hearers, we must truly repent, set things right in our lives, and prepare the way of the Lord.