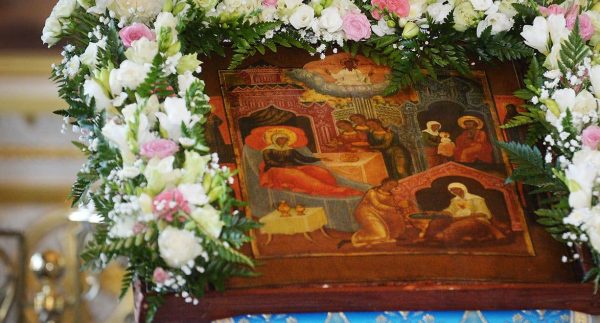 On September 21/8, the Church sings that the Nativity of the Theotokos has “proclaimed joy to the whole universe”.  It is easy enough to sing, but somewhat harder now for us to understand.  Why, we may ask, did the birth of a baby girl in around 18 B.C. or so proclaim joy to the whole inhabited world?

To fully understand what this birth meant, we must first understand the state of the world at that time.  The world into which Mary the future Mother of the Saviour was born was a doomed world.  The average person would live a short life (compared to today’s expected life span), a life filled with pain, poverty, and unceasing labour.  In Israel he would find himself oppressed by crushing taxation, vexed by foreign occupation, and troubled by suffering and disease.  (If this seems too pessimistic an evaluation, take some time to consider what it would be like to live in a world without anaesthetics.)   Life would be punctuated periodically with times of joy, such as the day of marriage, the birth of children, and times of pilgrimage and sacrifice in the Temple, but would end all too soon in sickness and death.  Little surprise that Zechariah the father of John the Baptizer described it as “sitting in darkness and in the shadow of death” (Luke 1:79).

To get some idea of what it felt like, think of the people who survived the sinking of the R.M.S. Titanic:  after that fabled ship sank without a trace at 2.20 a.m. on April 14, 1912, 705 people sat in lifeboats in the dark in the middle of the ice-cold Atlantic, waiting for rescue, unsure if it would come in time.  Two hours later, when they saw the approaching lights of rescue from the R.M.S. Carpathia, they were glad indeed.  In the words of our festal hymn, the lights of that ship “proclaimed joy” for them.  The birth of the baby girl chosen by God to be the Theotokos similarly proclaimed joy for the whole world, for it also meant that within a few short years, rescue would be at hand.   An angel of God would soon enough appear to Mary and she would give birth to the Messiah, who would end our long captivity and bring light and eternal life to the whole universe.

All of God’s long and painful striving with His covenant people had as its one and supreme goal the Incarnation, made possible through the free and courageous assent of a pious Jewish teen-ager from Nazareth, a young woman who offered her heart, her life, and her flesh to God, saying, “Behold, I am the handmaiden of the Lord.  Let it be to me according to your word.”  It was through that assent, by the Holy Spirit, that the timeless One entered time, and the One who filled heaven and earth became a foetus in a tiny human womb.  Through Him our long captivity would be ended.

At the feast of the Nativity of the Theotokos we hear the Lord’s words which say that blessing from God comes not through biology alone, but from hearing the Word of God and keeping it (Luke 11:28).  It was this Word which was addressed to Israel, and which they too often ignored.  It was this Word which was addressed to Mary and which she fully heeded and kept.  What is this Word?  It is the call to look away from this present life and to find meaning and life in the Kingdom of God.  It is the Word which calls us away from mediocrity to follow the Lord in the adventure of faith, to cease being mere children of the body and to become the children of the Kingdom.

This Word called Israel away from being a mere nation to become the Church; it called Mary away from the security of normal motherhood to become a disciple of her Son, even if it meant that a sword would pierce her heart.  It calls us all from being ordinary people to being extraordinary, wrapping our lives around Jesus as Mary did, and following Him along the way of the cross to our final glory.  That was Israel’s true destiny and destination.  It was a destiny and destination fulfilled by Mary of Nazareth as she became the Theotokos and the Mother of our God.  On September 21/8 we celebrate her faithfulness to that destiny.  Once we sat in darkness and the shadow of death, but then we saw the approaching lights of rescue as a little girl was born to Joachim and Anna.  Her birth proclaimed our coming rescue, and our eternal joy.