Source: Journey to Orthodoxy
After all these years, but God had something more to show us.
David E. Sumner | 09 January 2020 After two of her sisters were chrismated into the Orthodox church, Loni Freeman of Portland, Indiana, became increasingly drawn to the faith. She read books, listened to podcasts, and visited Orthodox churches. But her husband, Ron, was not interested. They were active members at a Methodist church where he had been a Sunday School teacher for 20 years, worship leader, and church council member. He was also a founding board member and past president of Youth for Christ of Jay, Adams, and Wells counties and often invited to speak at churches in the area.
Both Ron and Loni grew up in evangelical churches and raised their four children in a Christian home. Ron is president and chief executive officer of Jay Petroleum, the parent company of a chain of thirty-four Pak-A-Sak convenience stores with 450 employees in Indiana and Ohio. He is also a member of the Huntington University board of trustees where he is an alumnus of the Christian college.

Loni and her sisters grew up in a Baptist family. Her sister, Lisa, was chrismated at St. Elijah Orthodox Church in Oklahoma City, Oklahoma, in 2010.

“She had a library full of Orthodox books that we passed around, as well as videos and podcasts from Ancient Faith Radio. I remember being skeptical, fascinated, inspired and confused all at the same time by what I was learning. Some days I was so captivated by Orthodoxy that I devoured books by the hour or listened to podcasts all day long. Loni says Becoming Orthodox by Peter Gillquist was the most influential book in her journey.

“That is the first book that my sister gave me and made me want to read something else about Orthodoxy.”

She finally convinced Ron to visit a Fort Wayne Orthodox church. While they were driving home after their second visit, they were talking about the service, she asked him what he would think if she became an Orthodox Christian.

“I was unprepared for the look of pain and shock that crossed his face.” says Loni.

“That was a wakeup call for me because I had just considered it a bit of a fad for her. After 36 years of being of the same mindset about church, faith and all of that, I found it very difficult to accept. That was a tough couple of days for me, and we had several long talks about what it meant. I told her at the time that it felt like a spiritual divorce.”

“My roots in the Protestant faith run very deep. So, when Loni initially presented me with Orthodoxy, I wasn’t all that interested because I thought I had already found ‘the pearl of great price’ that Jesus was speaking of. But I really wanted to understand what motivated her to consider it. Whether it made sense for me wasn’t the point. I just wanted to understand and accept what she was doing. I just started praying in the morning and asking God to open my eyes to truth. I just wanted to know the truth. For ten weeks, I spent every free moment examining the faith; first its theology and then its history.”

“My most influential book was Three Views on Eastern Orthodoxy and Evangelicalismby Dr. Bradley Nassif. He did such a wonderful job in the first thirty pages of explaining what Orthodoxy is and its differences with Protestantism and did it in such a gentle way. For someone who was Protestant, it made me want to know more.

“In the end, I discovered that I had reached the boundaries of my Protestant faith. As I prayed each morning, I asked God to reveal his truth to me. The walls of those boundaries began to dissolve The thing that made me feel like I had to become Orthodox very quickly was the Eucharist. I was reading the verse in John where Jesus says, ‘If you do not partake of my body and blood then you have no life in you.’ I’ve read that verse for years and years, and then suddenly, I felt like Jesus was speaking to me personally. I quickly came to believe if I wanted that, the only way I could have it was to become Orthodox. That was very much a turning point for me.”

They began to visit Orthodox churches and discovered the nearest two were more than an hour away–one to the north in Fort Wayne and the other to the south in Fishers, an Indianapolis suburb. The driving time either way was about the same. The first time they visited St. George Orthodox Church in Fishers, they were immediately struck by the beauty and iconography of the new temple that was completed in 2013. They felt a warm welcome by Fr. Nabil Hanna, pastor, and the congregation, more than a third of whom are converts from other faiths.

“We were very, very impressed,” he says. 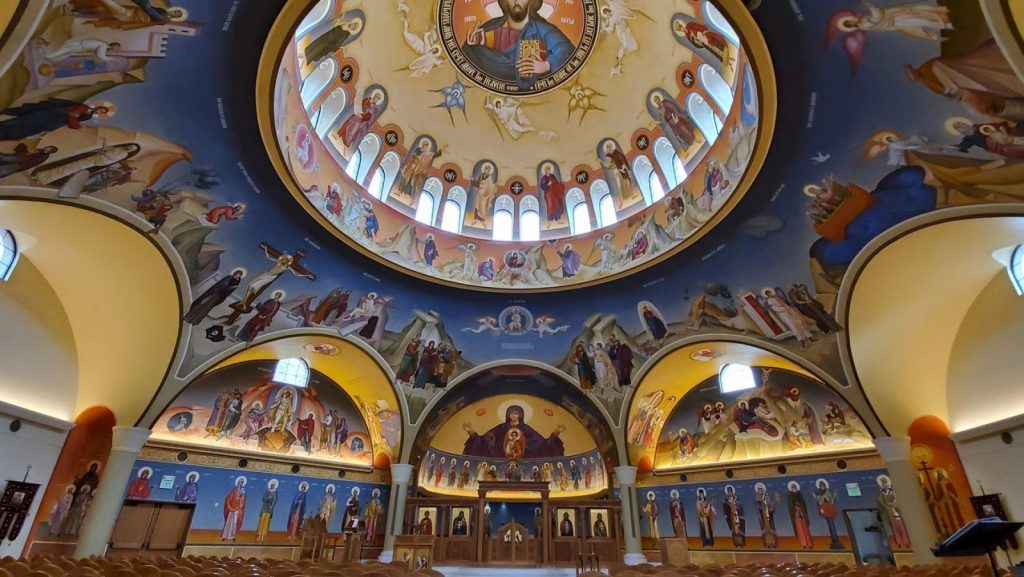 At the ages of 60 and 62, Ron and Loni were chrismated on January 6, 2018. They have become active members and Ron was recently elected to the parish council. Now they drive 72 miles each way to worship on Sunday. Sometimes they drive to attend midweek meetings and Lenten services.

They appreciate their pastor and friends at the Methodist church, who were very understanding of their decision to leave. “But it’s not easy to say goodbye, and I sometimes mourn the loss of fellowship and history that it took us to leave our Methodist and Protestant history behind,” says Ron.

Loni was asked if she had any advice for someone whose spouse doesn’t seem interested in the Orthodox faith.

“The only thing you can do is be patient and pray because truly it’s a work of the Holy Spirit. I would say don’t be critical. Sometimes I would go to church with him and then point out things that didn’t line up with my new theology. It was super hard to go there and not see things that I knew were not quite right.”

“That was not a good thing to do because it just made things worse,” says Ron.

As Loni reflects on the last three years, sometimes she wonders, “Why were we so blessed?” She says, “We were reasonably happy in Protestantism for all these years, but God had something more to show us.”

Most viewed articles
‘Black Jesus’ Depictions Violate Church’s Canons, Priest Says721
Metropolitan Hilarion: Conversion of Hagia Sophia into Mosque is a “Slap in the Face to all Christianity”567
Father Thomas Hopko and his Fifty Five Maxims of Christian Living309
Turkish Supreme Court Annuls Decree that Turned Hagia Sophia into a Museum154
Metropolitan Hilarion: the Color of Christ’s Skin Is of No Importance for Christians, Because He Is Revered as God Incarnate118
Do We Ignore the Demons in Our Lives?97
The Feast of the Holy, Glorious and Chiefs of the Apostles, Peter and Paul54
Jerusalem’s Church of Holy Sepulchre Shuttered Again amid Coronavirus Resurgence25
Most popular authors
Pravmir.com team1,585
Fr. Bill Olnhausen309
Priest Luke A. Veronis97
Protopresbyter George D. Konstantopoulos54