A six-year-old Kristina was given free hearing aids, but their design was outdated. The girl could hardly hear with them, she often had headaches. Her large family could not afford a modern digital device: there are five children in the family, the parents are paying for the mortgage. Then they asked the residents of Miass for help. Almost in a month, people raised money and bought the necessary device for the child.

Liana Basnyak, the girl’s mom, says that she was warned immediately when the devices were given due to disability that they would have to buy other, more modern aids. At 6.5 years old, Kristina barely spoke, because she could not hear. And she is about to go to school.

Kristina’s health condition has been evident since birth. The girl was born prematurely, it happened in the Luhansk region during the bombing. The family went to Russia and got stationed in Miass. The Basnyak family is grateful to the city residents for support.

— We grabbed the children and fled in what we were wearing. We started everything here from scratch. The locals helped us with things and food. If not for the good people, I do not know how we would have survived, – told Liana Basnyak to the Agency for Social Information.

When she and her husband realized that they could not buy Kristina an expensive device, they turned to the family support center “Two wings”. The organization announced the charity collection and transferred 46 thousand rubles, which were raised by the city residents.

— We are grateful to my husband’s colleagues from the “Soyedinitel” factory: they gave 143 thousand rubles from their salaries. That alone caused tears of joy, – says Liana Basnyak.

Kristina hears perfectly with new hearing aids. Liana says that the girl was very surprised when putting them on for the first time.

The hearing correction center, where the family purchased the devices, made a discount of nine thousand rubles. Parents will use the saved money to pay for classes with a speech pathologist.

In Crimea, a seven-year-old girl saved the child who fell into a pool

The Crimean authorities will award a seven-year-old Daria from Tula, who saved a five-year-old boy. The child fell into the hotel pool, but could not swim, as TASS reports.

It happened in a private hotel in the suburbs of Sudak. The boy was riding a scooter and fell into the pool. Daria jumped into the pool in her clothes and pulled the boy out. The incident was caught on video.

Specialists of the State Public Institution at the Republic of Crimea “Crimea-spas” together with members of the Crimean regional branch of all-Russian Public Organization “Russian Union of Rescuers” are already determining the circumstances, getting the child’s parents contacts, and preparing documents for awarding.

— Not every adult would decide to take such a move, the child certainly needs to be presented with the award, – stated Sergey Shakhov, the Emergency Situations Minister of the Crimea.

A Bashkir athlete swam 250 kilometers in support of butterfly children

Radmir Bikmetov, a swimmer from Ufa, raised 365 thousand rubles for a specialized rehabilitation for children with epidermolysis bullosa in one of the health camps in Bashkiria. The athlete swam down the Belaya river from Sterlitamak to Ufa for six days. He organized a fundraiser and encouraged businessmen and all residents of the Republic to support the campaign.

— I started from the city of Sterlitamak in the morning on July 18, – said Radmir Bikmetov. – In average, I swam 36 kilometers a day. I had two stops each day: a lunch break for 2-3 hours and an overnight stay. We stopped on the river bank, put up a tent, and spent the night in sleeping bags on camping mats. We were able to rest at lunch only a couple of times because of flies, mosquitoes, horseflies, and the heat. At night, we slept for 5-6 hours and got up at 4. 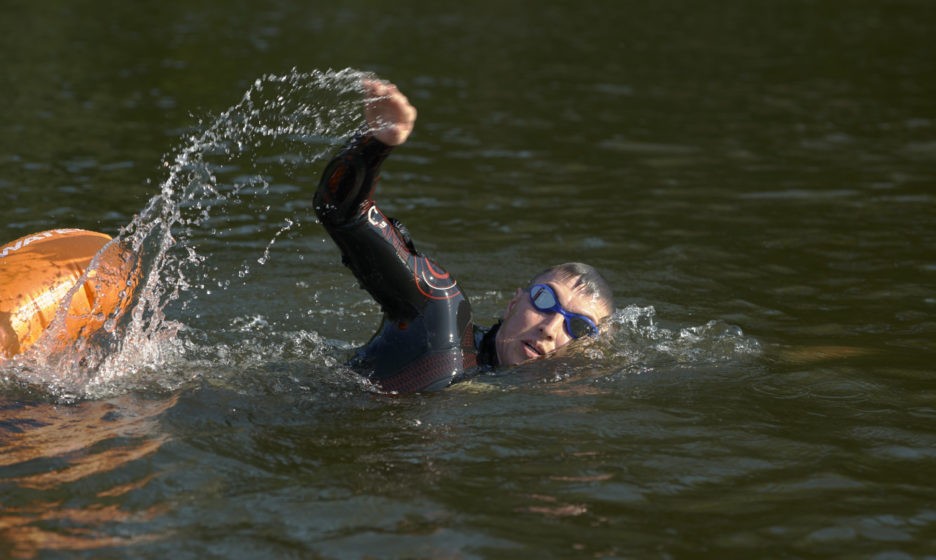 While the athlete swam, a special committee arrived from Moscow to find a suitable health camp and to train the staff.

— The swim would have taken place anyway, so I decided to do it as a charity. Personally, I donated 250,000 rubles, this amount is equal to the kilometers covered, – told Radmir Bikmetov.

Rehabilitation will proceed according to the program developed by the charity fund “Butterfly children” and under the supervision of the fund’s experts. The program includes physical therapy with an instructor, salt therapy rooms, mineral baths with special treatments, airionotherapy, cedar barrels, biofeedback therapy, psychotherapy classes in a neurosensory room, correctional and developmental sandplay therapy.

The goal of the program is to support the health of children with epidermolysis bullosa, to improve their skin condition, to prevent relapses, and to slow down the progression of the disease.

Children will stay in the health camp with their parents. While the children would be undergoing rehabilitation, the parents will receive psychological counseling. The program is expected to start in the fall of 2020.