Why Aren’t Women Allowed In The Altar? Why do priests keep women out of the altar? Why are there places in the church that are forbidden for women? Is a woman worse than a man? – Archimandrite Alipius (Svetlichny) answers.

In the eyes of the Church, a woman is not unclean at all, as some people with liberal attitudes suspect. Otherwise, the Church would not praise the Virgin Mary so much!  She would not honor the multitude of holy women and virgins.

Moreover, there is no significant difference between a man and a woman, a layperson and a priest in moral theology. Theology recognizes that we all are human beings! There are people who seek salvation, and people who condemn themselves to perdition. This is the only distinction.

In his interpretation of the 15th Rule of the Council of Chalcedon, Balsamon writes: “What is said in the given rule is completely out of use; for nowadays they do not ordain the deaconesses, although some ascetic women might be called deaconesses albeit not in the proper sense; because there is a rule which determines that women should not enter the holy altar. So, the one who cannot enter the holy altar, how will she perform the deacons’ functions?” And that’s where we stumble! It turns out that there is a rule that determines that women should not enter the altar… Looks like discrimination begins…

Let’s find that rule to understand why women shouldn’t go into the holy altar. 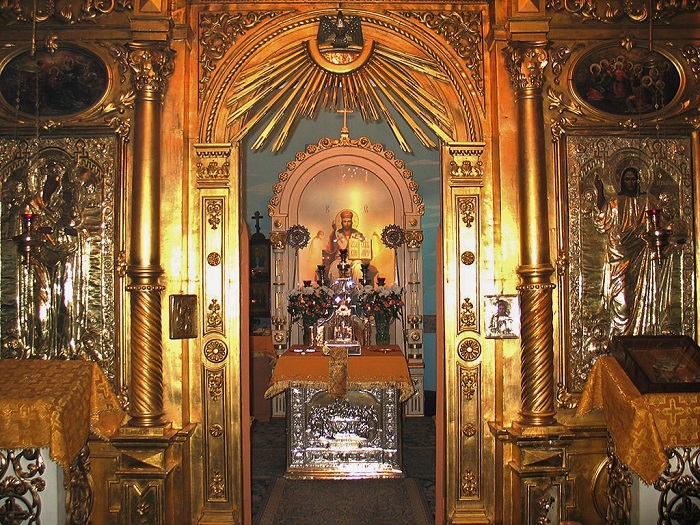 Let us turn to the Syntagma and look at Chapter 22, “That Women Should Not Enter The Holy Altar.” We read: “The 44th Rule of the Council of Laodicea considers it inappropriate for women to have access to the holy altar, even though they had previously been allowed to do so. For if lay men are forbidden to do so (69th rule of the 6thEcumenical Council), the more so should women [be forbidden]. Women are not allowed [in the holy altar], as some say, for reasons of their involuntary monthly period.”

So here is the problem! It turns out that lay men are also banned from entering the altar! This is what the 69thRule of the Sixth Ecumenical Council says: “Let no one of the laymen be allowed to enter the holy altar. Yet according to some ancient custom, it is not forbidden to royal power and dignity when the emperor wishes to bring gifts to the Creator.”

Thus, only the king may enter the altar because he is anointed, and only when he brings a gift, i. e., a royal ritual gift to the church.

Let’s try to understand why the rule doesn’t let lay people in the altar.

I don’t think we need to look for any clarification, because it is clear enough! The sanctuary is meant to be a place of divine service. It was separated from the rest of the church so that the place might not only be sacred, but also so as to prevent disorder and tumult that often occurs when there are too many people in the church, especially on holidays.

The altar should be the place of deep prayer and exceptional order. This is especially important, since the Holy Chalice with the Blood of God is on the holy table! The Lamb of God in the form of the Bread is on the table! There must be no room for negligence in the altar. Rather, it is the place for awe and reverence in all things. 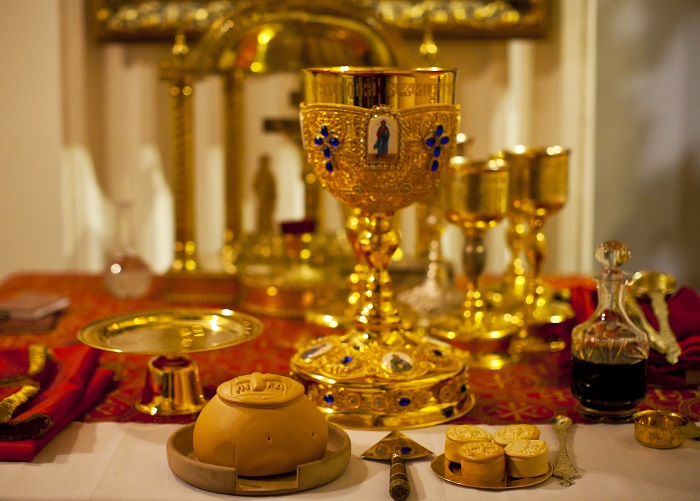 If the lay people were to enter the altar, it would become a passageway, and soon enough, disorder and nuisance would ensue.

Nowadays we can see how often laymen harass priests who come out of the altar for some reason. Everyone needs to say something, ask a question, hand a note with a lot of explanations to the priest or even give him a gift, or sometimes comment or complain with indignation. Some people try to start their own customs at the place where they stand… Imagine what that kind of hubbub would look like in the altar!

Therefore, the wise decision of the Holy Fathers was that only those who serve the Holy Sacraments should be in the altar.

Nevertheless, time has made changes to the provisions laid down by the Councils, and today we can see some lay people in the altar. What are they doing there?

Are they idling around? No, they perform some duties there. Kormchaia Book requires a priest never to begin the Liturgy unless he has an acolyte at his disposal.

Then we suddenly encounter another strange thing: you can see nuns in the altar in convents! They are allowed to enter the altar for the same purpose: they assist the priest during the service.

Most viewed articles
Our Laxity towards Sin154
The Dangers and Values of Extremism127
Scattered Thoughts and the One God112
Metropolitan Hilarion Answers Questions on Holy Trinity, God’s Will, Humility and Forgiveness102
Most Russians Approve Amendments to the Russian Constitution101
Supreme Court of Turkey: Status of Hagia Sophia Can Be Changed by Presidential Decree80
Church Services will Resume in England this Weekend63
12th anniversary of Romanian Diocese of Australia and New Zealand Marked in Melbourne26
Most popular authors
Pravmir.com team346
Nikolaos Georgantonis, Theologian154
Priest Luke A. Veronis127
Archpriest Stephen Freeman112
Ștefana Totorcea26