1000 Years of Russian Orthodox Church Architecture on Display in Oregon 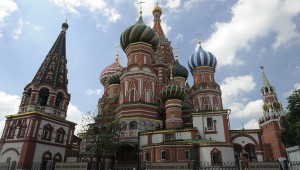 EUGENE, Oregon, June 25 (RIA Novosti) – Photographs of Russian Orthodox cathedrals from sites as far afield as St. Petersburg and the Aleutian Island chain of Alaska have gone on display at the Jordan Schnitzer Museum of Art at the University of Oregon.

The pictures, taken by A. Dean McKenzie, professor emeritus of art history, were taken during field trips to Russia and Alaska and display diverse architectural styles.

The installation includes images not only of celebrated cathedrals such as St. Basil’s on Red Square in Moscow and the 11th century Haghia Sophia Cathedral in Novgorod, but also traditional wooden churches known as “kokoshniki” and the much less well-known Church of Saint Nicholas, in Juneau, Alaska, which was established by members of the indigenous Tlingit people in 1881.

The exhibit is open until August 11.