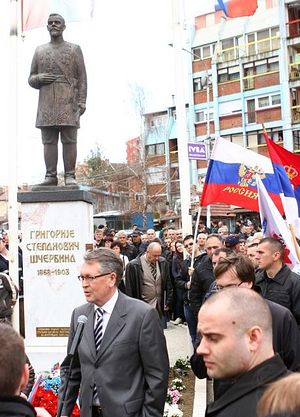 On March 31, the 110th anniversary of death of the Russian consul Gregory Stepanovich Shcherbina (1868-1903) was commemorated in the north part of Kosovska Mitrovica.

Alexander Chepurin, the current Russian ambassador in Serbia, and Alexander Vulin, the director of the Government Office of Kosovo and Metochia placed flowers to the monument in the north part of Kosovska Mitrovica to the Russian consul who had been killed in Kosovo and Metochia. Bishop Theodosius of Razhko-Prizren, all heads of districts of Kosovo and Metochia, heads of the north municipalities, representatives from the Pristina university as well as numerous citizens and others were present at this event.

In the Technical Institute in Kosovska Mitrovica a meeting was held with discussion on the theme “Mission of the Russian consul Shcherbina against the backdrop of modern Russian-Serbian relations”, including a short film about the Russian consul’s life.

Gregory Stepanovich Shcherbina was appointed a consul in the town of Kosovska Mitrovica early in March 1903. It was decided to send this experienced diplomat to Kosovska Mitrovica in order to get true information on the suffering of Serbian people at the peak of pogroms and attacks committed by Albanians at the turn of the 19th and the 20th centuries. In 1903 Shcherbina died of his wounds after an Albanian had shot him at point blank range in the southern part of Kosovska Mitrovica. Serbs of Kosovo and Metochia took the death of Shcherbina as their national tragedy. According to reports of that time, Shcherbina “gave his life for Precious Cross, he suffered for Holy Orthodoxy and for freedom of Serbian people”.