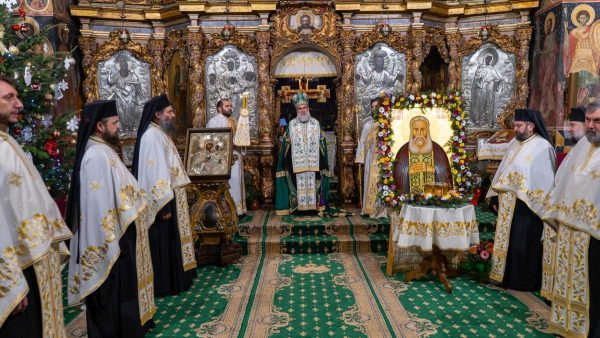 “Saint Antipas is also present and honoured in the synaxaria of other Orthodox Churches, such as the Churches of Russia and Serbia, which means that this holy hesychast is celebrated by universal Orthodoxy. Therefore, we could say that a Romanian is present in the list of the great venerable and hesychast saints, the intercessors who acquired the pure prayer and partook of the Tabor light,” Archbishop Ioachim said.

The Archbishop of Roman and Bacău spoke about the significance and importance of the Commemorative Year 2022 in the Romanian Patriarchate, dedicated to the Hesychast Saints Symeon the New Theologian, Gregory Palamas and Paisius of Neamt. “They have appeared in the fresco of history at a distance of 300 years from each other, which means that God, from time to time, wants the spiritual renewal of the faithful and the monastic life,” Archbishop Ioachim said.

“This saint, born in the southern region of Bacău county, in Dealul Morii commune, Calapodești village, is a protector of our diocese and a result of the renewal of the monastic life of the 19th century.”

In his sermon, the archimandrite referred to the saint’s years of asceticism on Mount Athos, where he acquired the gift of tears, prayer, and foresight. “He amazed everyone not so much by his spiritual performances as he learned in the school of Athonite prayer, but by his early age, the dedication with which he engaged in this spiritual work being quite and utterly special.”

“His soul and heart were burning with longing for prayer, for God, and heaven. His heart was a living flame, which for the love of God would have sacrificed anything,” the vicar added.

The Venerable Antipas of Calapodești is one of the Patron Saints of the Archdiocese of Roman and Bacău. He was born in the south of Bacău county, in Calapodești village, where a monastery was built in his honour.

Photography courtesy of the Archdiocese of Roman and Bacău