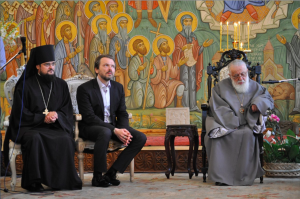 On 15 October 2013, an exhibition “The ‘Measured Icon’: Its History and Its Present”, organized by the Russian Club of Orthodox Maecenases, was presented at the Holy Trinity Cathedral in Tbilisi. Opening the exhibition was His Holiness and Beatitude Catholicos-Patriarch Ilia II of Georgia. Hieromonk Stefan (Igumnov), a DECR staff member, took part in the event with the blessing of Metropolitan Hilarion of Volokolamsk.

The Primate of the Georgian Orthodox Church noted that the people of Russia and Georgia are united by unbreakable spiritual bonds based on the unity of faith and common historical tradition. His Holiness shared with those present his recollections of the years spent in Russia, when he studied at the Moscow Theological Academy, and wished the organizers of the exhibition God’s help in their work.

Hieromonk Stefan (Igumnov) conveyed to all those present greetings from the Supreme Authority of the Russian Orthodox Church.

The Club of Orthodox Maecenases has already presented such exhibitions in a number of countries. The exhibition opened in Tbilisi is notable for the old icons dedicated to the Feasts of the Theotokos, which have been brought from the sacristy of the Laura of the Holy Trinity and St Sergius, as well as for the modern icons containing particles of the holy relics of the Orthodox saints. According to Father Stefan, the organizers of the exhibition have brought to Georgia a living expression of the faith of the Russian people, a precious treasure which is kept deep in the people’s heart and is generously shared with true friends and beloved brothers. The exhibition will last for about two weeks and many Georgian faithful will be able to pray at the shrines brought from Russia.