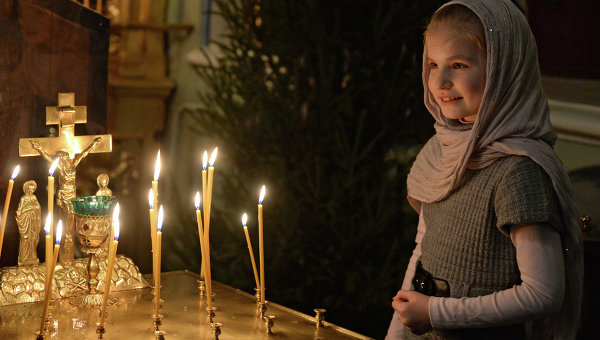 The figure stands at about 2 percent of Moscow’s total population of some 12 million.

President Vladimir Putin attended a Christmas service in a new church in the southern city of Sochi, which will host next month the Winter Olympics.

National television also aired early Tuesday a lengthy interview with Patriarch Kirill, who sermonized against the commercialization of Christmas, warned against a possible revolution in Ukraine, criticized Internet addicts and promoted a nationwide cleanup of the country.

The church and the state are separated in Russia, but the Kremlin was accused in recent years of aligning with the Orthodox Christian Church. Kirill endorsed Putin’s presidential bid in 2012.

About 68 percent of Russians identified themselves as Orthodox Christians in a nationwide poll held last November by the independent pollster Levada.

But only 14 percent of the respondents said they attend religious services at least once a month.

Most viewed articles
What Does It Take for Us to Have a Heart for God?153
You Are Not Alone – And Neither Is God115
Thank God at All Times106
Metropolitan Onuphry: Martyrs Are an Example of Greatest Love for God95
His Grace Bishop Alexis Returns from Visit to Russia75
Patriarch Kirill’s condolences over the death of people in a car crash in western Bulgaria72
Pastoral Message from Metropolitan Tikhon for Thanksgiving Day 202154
I Cannot Change God’s Will. Does It Mean that Prayer is Useless?2
Most popular authors
Pravmir.com team242
Archpriest John Moses (+2019)152
Archpriest Stephen Freeman115
Priest Luke A. Veronis106
Metropolitan Tikhon of All America and Canada54
Fr. Eugene Murzin2