Source: Assyrian International News Agency
Mourad Haroutunian | 14 August 2014
More than 3,000 Canadian-Iraqi Christians took to the streets of downtown Toronto on Sunday to call on the world to rescue their compatriots who are being killed or deported at the hands of militants belonging to the Islamic State of Iraq and Syria (ISIS), a more brutal offshoot of al-Qaeda. 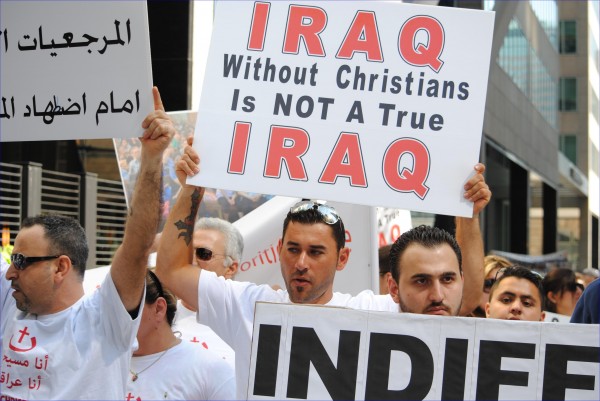 The silent demonstration, which saw neither slogans being chanted, nor Iraqi flags being raised, was led by a group of clergymen mainly from the Iraqi Syriac and Chaldean churches.

Clad in white T-shirts, protesters marched three kilometers to the Ontario Parliament, carrying banners reading “Save Iraqi Christians from the massacres of ISIS” and “We are the root of Iraq. Stop forcing us out of our land.”

Many participants voiced anger at the militant group that has staged the recent wave of violence in their home country.

“My first cousins have fled their towns, with only their clothes,” said Sarmad Gorial, one of the protest’s organizers. “For more than seven days, they haven’t even been able to change their underwear. They sleep in the streets, in churches, everywhere.”

Thousands of Iraqi Christians and Yazidis have been trapped with limited food and water supplies in Iraq’s north-western mountains after fleeing Mosul, Iraq’s second-largest city, and the town of Sinjar, both seized by ISIS militants for the past two months.

Around 850,000 people have been forced to flee Iraq, bringing the number of Iraqis who have been displaced since the start of the year to 1.4 million, according to Canadian government estimates.

The Iraqi tricolor, charged with the Allahu Akbar (“God is Great”) phrase, was not seen at the protest.

Speaking to the crowds, Father Niaz Toma of the Chaldean parish of St. Thomas in Hamilton called on the Iraqi government to change the official flag because Christians are being killed under that religious slogan.

Father Toma also called for amending the constitution, in the footsteps of post–June 2013 Egypt, so that Islam, the most common religion in Iraq, becomes “just a source, and not the source of legislation”, to show that Iraqi Christians will have a say in shaping their country 11 years after the U.S. overthrew former president Saddam Hussein.

“We encourage our people to get involved in politics,” he said in remarks to Al Arabiya News. “That’s the main way our voice will be heard.” 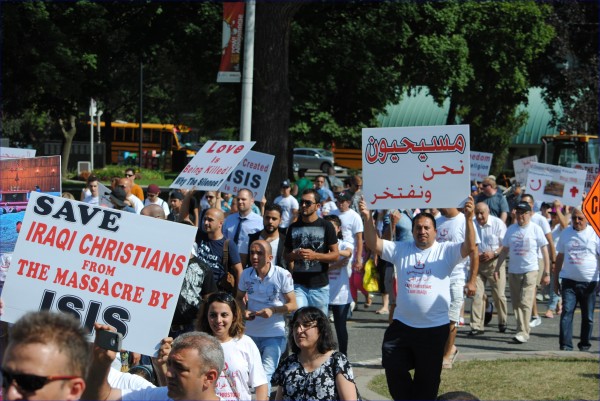 The demonstration occurred as the Canadian government pledged 5 million Canadian Dollars ($4.55m) in additional aid for Iraqi Christian and Yazidi civilians who have been forced to flee. The money will be used to buy hygiene kits, blankets, cooking equipment and food.

“Canada will continue working closely with our allies to determine how we can best continue to support the needs of Iraqi civilians, particularly religious minorities,” Christian Paradis, Minister of International Development, said in a statement on Sunday. Since the beginning of the year, Canada has provided over 16 million Canadian Dollars ($14.56m) in response to humanitarian needs in Iraq, some of which is for populations affected by civil unrest.

“We don’t need money,” said Father Jacque Yacoub of the Syriac Orthodox Church. “We need to open the eyes of the world: What’s happening is genocide. We want the government of Canada to interfere–to speak up.” “Why is everybody ignoring this situation? No one is talking about that!” Father Yacoub continued, wondering why Western and Eastern countries alike remain passive.

Matta Hanna Abboush, a Syriac Orthodox monk, was at the Monastery of Mar Mattai, 20 Kilometers from Mosul, on the day ISIS militias captured the city. “You feel like it was the end of the world.”

Abboush said his monastery hosted close to 60 Christian families for three weeks after that day, before he left Iraq on the July 14 for a previously scheduled visit to his Toronto-based brother. He was in Canada on July 19, when ISIS demanded that Christians in Mosul and surrounding villages either convert to Islam, pay a special tax, or be executed.

Abboush will leave Toronto to return to his monastery on August 30. “I’m not afraid,” he said. Though the monastery is not yet under the control of ISIS, the nearby town of Bashiqa, where his parents’ house is located, has been under U.S. airstrikes for the past few days.

“Americans always take action too late,” said Raghid Gabriel, an Iraqi Syriac Catholic from Mississauga. “They don’t care about the people themselves. They care about the benefits from the whole story,” continued Gabriel, who came to Canada six years ago and works as a mechanical engineer.

At the end of the rally, organizers read a petition to the Prime Minister of Canada where they asked the government to facilitate the process of accepting more refugees, primarily Iraqi Christian refugees.

“They should stay there, they should not have to leave their homes,” said Cardinal Thomas Collins, Toronto’s Roman Catholic archbishop, in comments to Al Arabiya News “If they cannot stay there, we need to provide refuge for them.” More than 18,200 Iraqi refugees have settled in Canada since 2009, the government says.

On the stage, the Canadian cardinal urged Canada’s Muslim communities to deplore the violence in Iraq. “I encourage the Muslim leaders of Canada to speak up,” Collins told the crowd.

A Shiite clergyman, Sayed Ali Al-Jazairi, and former Canadian MP Jim Karygiannis were also among high-profile guests who joined the Eastern Christian clergymen on the stage.

The protest gathered Canadian-Arab Christians of Egyptian and Lebanese descent, who came on buses from as far as Oakville and Hamilton in the Greater Toronto Area. “The number of participants by far exceeded our expectations,” said Luay Dawood, a 30-year-old Iraqi Chaldean from Mississauga and one of the organizers of the demonstration. “We had expected a crowd of 2,000.”

Dawood urged the Canadian government to do more to protect persecuted Middle Eastern Christians. “I don’t address the Iraqi government. I feel my allegiance is now to Canada,” said Dawood, who obtained his Canadian citizenship more than a year ago.

Iraqi Christians have staged similar demonstrations in many Western countries, including the United States, Australia, the UK, Germany, Sweden and France, hoping their voice will be heard. However, they feel hopeless.

“I’m not optimistic,” said Father Toma. “What we see on the ground is that a movement like ISIS is highly supported by regional and international powers. However, as Christians, we have trust in the Lord.”