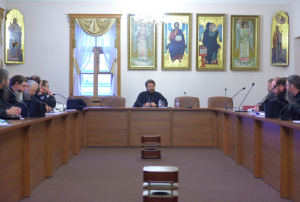 With the blessing of His Holiness Patriarch Kirill of Moscow and All Russia, the 3d two-day advanced course for newly-installed bishops of the Russian Orthodox Church opened at the Ss Cyril and Methodius Institute of Post-Graduate and Doctoral Studies.

Metropolitan Hilarion of Volokolamsk, rector of the Institute and head of the Department for External Church Relations, delivered an introductory lecture on the external relations of the Russian Orthodox Church. He briefly reminded the audience of the history of one the oldest Synodal departments noting that Metropolitan Kirill of Smolensk and Kaliningrad, now Patriarch of Moscow and All Russia, headed the Department for almost two decades. “It was the time when the disintegration of the Soviet Union had already started, when the atheistic ideology weakened and when the state power grew too weak to stop inter-ethnic conflict which broke out throughout the Soviet Union. The Church had to give a quick response to the new situation”, he reminded the audience and stressed that the Russian Orthodox Church played a very important role in the situation of inter-ethnic conflicts and civil confrontations.

Today the Department carries out its work in the areas of inter-Orthodox and inter-Christian relations, Orthodox concerns in the far-abroad countries, work with expatriates and interreligious dialogue outside Russia.

Metropolitan Hilarion stated that the last 25 years in the life of the Russian Orthodox Church can be described as a full-scale revival of church life. In this period, through the efforts of parishioners and with the support of benefactors and the state, the Church has opened 25 thousand churches and 800 monasteries. This fact is all the more significant when compared with the growing secularization of the European society. “Our Church’s special conditions compel it to step up its work abroad”, he continued.

The DECR chairman also spoke about the relations between Local Orthodox Churches and preparations for a Pan-Orthodox Council which began over 50 years ago. The 1976 Pan-Orthodox Pre-Council Conference formulated ten basic issues to be considered by the Council, namely, Orthodox diaspora, autocephaly and ways of proclaiming it, autonomy and ways of proclaiming it, diptychs, calendar issues, marriage obstacles, conformity of church resolutions on fasting, Orthodox Churches’ attitude to the rest of Christendom, Orthodoxy and the ecumenical movements, contribution of Local Orthodox Churches to the triumph of Christian ideal of peace, freedom, brotherhood and love among nations and elimination of racial discrimination.

These issues continue to be discussed on the inter-Orthodox level. In recent years, agreement has been achieved on eight out of ten issues. Metropolitan Hilarion stated an opinion that some of the already prepared documents concerning ecumenism and the assertion of Christian ideas of peace, freedom, brotherhood and love among nations had to be re-written in the light of new problems, such as the persecution of Christians in North Africa and South-East Asia.

He emphasized that the Council should be thoroughly prepared not only with regard to its content but also procedure so that the position of each Local Church might be taken into account. Therefore, the decisions should be made strictly by consensus.

Speaking about the inter-Christian relations, Metropolitan Hilarion said that important in the relations with the Catholics was not only theological dialogue but also cooperation in social service and efforts to preserve the moral foundations in people’s life. “Here we have a very vast field for cooperation because in today’s secular world, both the Orthodox and the Catholics encounter the same challenges. First of all, it is the challenge of secular ideology which does not recognize at all absolute moral values. As a result, we see in the West the propagation of homosexuality, laws on same-sex unions, the right of same-sex couples to adopt children, etc. And in spite of the fact that there is no agreement today with the Catholic Church on a number of theological and ecclesiological issues, we can work together to protect traditional moral values – the area of our cooperation we have actively developed today”.

Speaking about the relations with Protestant denominations, Metropolitan Hilarion pointed out that today, almost on the eve of the 500th anniversary of the Reformation, the Protestant world represents a very diverse picture of different Christian communities, some preserving certain closeness to Catholicism, while others diverted very far from it. There are Protestant communities which uphold traditional moral values, such as Russian Baptists, while in western and northern European countries and in North America, the Protestant communities are dominated by the spirit of liberalism, that is, the desire to adjust to the modern standards. “In the 70s and 80s, liberalism influenced by the feministic movement led to the introduction of female priesthood in Protestant communities and nowadays they have already introduced the female episcopate. There are already communities which have introduced the blessing of same-sex unions. We sever all contacts with such communities because we believe that there is a line not to be crossed over”, he said.

In this situation, the Church still maintains cooperation with such communities over international and social problems. In particular, the recent years have posed before the whole Christian community the problem of persecution against Christians in the Middle East, North Africa and some other countries. “In my view”, the metropolitan said, “today it is problem number one. What is at stake is the very survival of Christianity in a region where it was born and has existed for two millennia… There are almost no Christians left in Libya, Afghanistan, Pakistan and a number of other countries. The further existence of Christians in Syria is engendered today… Actually, the point is the fate of a whole church, the Church of Antioch. It is a problem that needs common efforts. And I should say our dialogue has brought forth certain fruits”.

The advanced course will also deal with church-state relation, the Church’s internal order and pressing social and theological issues.

The newly-installed bishops will also take part in the opening of an international conference on Theological Reflection on Martyrdom, Confession and Mass Repression” to be held on October 24-26, 2013.