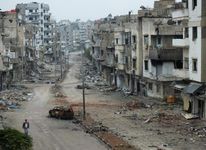 Moscow, October 16, Interfax – A group of Syrian Christians have applied for Russian citizenship, according to the Russian Foreign Ministry.

“Since Syrian law allows dual citizenship, we have decided to seek citizenship of the Russian Federation if this is possible. Russian citizenship would be an honor for any Syrian Christian who wished to acquire it,” the group said in a letter to the Russian Foreign Ministry.

A Russian translation of the Arabic text of letter is posted on the ministry’s website.

“Our appeal does not mean that we have any mistrust in the Syrian army or government. However, we are scared of the conspiracy of the West and hateful fanatics who are waging a brutal war against our country,” the letter says.

“It is for the first time since the Nativity of Christ that we Christians of Qalamoun living in the villages of Saidnaya, Maara Saidnaya, Maaloula and Maaroun are under threat of banishment from our land. We prefer death to exile and life in refugee camps, and so we will defend our land, honor and faith, and will not leave the land on which Christ walked,” it says.

“The Christians of Qalamoun believe that the purpose of the Western-backed terrorists is to eliminate our presence in what is our native land, and with some of the most revolting methods as well, including savage murders of ordinary people,” the letter says.

“We see the Russian Federation as a powerful factor of global peace and stability. Russia pursues a firm line in the defense of Syria, its people and its territorial integrity,” it says.

“None of the about 50,000 people – physicians, engineers, lawyers, entrepreneurs, – who are willing to sign this application want to leave their homes. We possess all that we need, we are not asking for money,” the letter says.