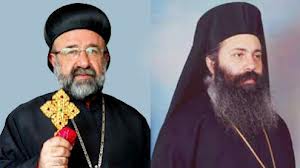 “I am pleased that 72 bipartisan Representatives in the House joined together in urging the Secretary of State to make this issue a priority,” said Rep. Sherman, a senior member of the Foreign Affairs Committee and a member of the International Religious Freedom Caucus.

“It has been almost a month since Metropolitan Ibrahim and Metropolitan Yazigi were kidnapped,” said Rep. Bilirakis. “I am deeply concerned about their safety and demand their immediate return. These men of God faithfully served the Orthodox community during the ongoing conflict in Syria and their kidnapping highlights the troubling rise in abductions.”

“We urge the State Department to make Metropolitan Yazigi and Metropolitan Ibrahim’s immediate release and safe return to Aleppo a priority in our efforts in the region,” said the Members in the letter.

The full text of the letter can be found on Congressman Sherman’s website or in this PDF file.

On April 26 the Assembly of Bishops sent a letter to Secretary Kerry, asking him to work for the immediate release of the Archbishops. That letter can be read here.