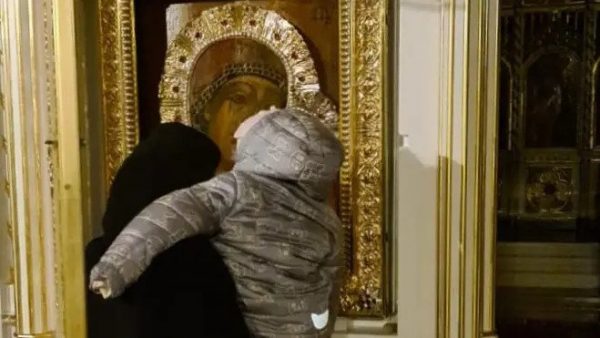 Photo: The Abbess of the monastery touched the little girl to the icon of the “Syriac” Mother of God on Tuesday evening, 16 August 2022.

Shortly after the feast day of the Ghighiu Monastery, Archdeacon Mihail Bucă’s family was deemed worthy of a miracle from the “Syriac” Icon of the Mother of God. Thursday, August 18, the health of their little girl, Irene Ecaterina — currently awaiting the last round of chemotherapy — has improved following her contact with the icon.

The child has leukemia. Chemotherapy for this type of cancer greatly decreases the body’s immunity.

“Tuesday morning, her tests showed that her count of neutrophils, which play a vital role in fighting off pathogens, was close to zero — 10 to be exact,” says Archdeacon Mihail Bucă.

“At home, our bags are packed. and we are prepared at any moment for an urgent hospitalization,” explains Daniela, the little girl’s mother.

“There are specific treatments that can be done to increase these counts, but it would have been quite difficult for us since, at the last round, we spent six weeks at the hospital.”

Before this moment, the doctors had decided that it was better that Irene Ecaterina stay at home between chemotherapy rounds, in a more familiar environment, to enter the fourth round of chemotherapy with renewed strength. As a precaution, the little girl goes for blood tests every two days.

Tuesday morning, her blood tests came back bad. The little girl had oral lesions, which indicated that the neutrophils were not doing their job. Not only was she no longer able to eat normally, but interacting with other people and her surroundings could make her sick very easily. The family then made a decision: to cling to the Mother of God. Photo: Tuesday evening, 16 August 2022, Archdeacon Mihail Bucă and his wife, Daniela, took Irene Ecaterina to the Icon of the “Syriac” Mother of God, at the Ghighiu Monastery, Prahova County.

“We went to the Ghighiu Monastery Tuesday evening, even though that meant taking Irene out of the house and letting her interact with the nuns and the other guests at the monastery, contrary to the advice of the doctors,” says the little girl’s mother.

“It was an act of desperation, which we took upon ourselves with faith that the Mother of God will not abandon us,” she adds. “Irene is at home in this monastery, where she’s hugged and kissed the icons in the church ever since she was a little girl.”

Stavrofora Epiharia Lungu, the Abbess of the Ghighiu Monastery, took the little girl in her arms, opened the glass of the icon, and had Irene Ecaterina touch the Mother of God. Her parents also venerated the icon.

“That was the first time that we too touched the wood of the icon directly, and I was amazed at the beautiful fragrance that emanated from it,” says Daniela, the wife of Archdeacon Mihail Bucă.

Thursday, they took the little girl back to the hospital for blood tests. “We felt that she was doing better; the thrush in her mouth was gone thanks to the treatment prescribed by the doctor,” says Daniela.

But to the great joy and surprise of the parents and doctors, the neutrophil count had increased to 680 and the platelets to 128,000. As a result, the doctors allowed the little girl to go home until Monday, which is yet another milestone victory in Irene’s fight for health.

Photo: The Abbess of the monastery touched the little girl to the icon of the “Syriac” Mother of God on Tuesday evening, 16 August 2022.

“Ghighiu is our beloved monastery, and we give glory to the Mother of God, who always does miracles. Glory to God for all things!” says Daniela.

“We must give thanks every time we have the chance to do so and encourage others as well: if you go forward with faith and hope, God will not abandon you.”

Furthermore, the family is grateful to the doctors of the Division of Pediatric Hematology–Oncology at the Fundeni Clinical Institute, for treating their young patients with such devotion and understanding.

As a mark of gratitude, the family has proposed to the Asociatia Liga Legendelor (The Association of the League of Legends) to organize a charity match with football legends in order to raise funds not for Irene Ecaterina, but for this Division of the hospital, and therefore also for its young patients.

Patriarch of Romania: We are called to become the hands of God’s merciful love for the unborn children