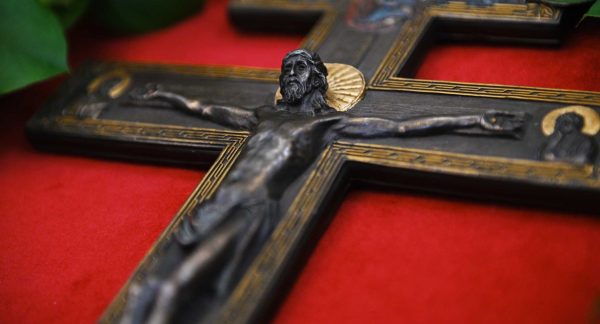 The temptation to make faithfulness to Jesus Christ merely a matter of outward obedience to a set of laws goes back to the first century and is still with us today.  The problem with legalism is that, as admirable as a life lived according to even the best code of conduct may be, it cannot heal our souls by making us participants in the eternal life of the God-Man. The Nativity of the Theotokos and the upcoming feast of the Elevation of the Holy Cross both remind us that only the Savior Who vanquished Hades is able to make us heirs by faith to His fulfillment of the promises to Abraham.

The Savior’s grandparents Saints Joachim and Anna had despaired of fulfilling their role in the ongoing life of the Hebrew people due to their childlessness well into old age.  God heard their prayers, however, and miraculously blessed them to conceive a daughter, whom they offered to the Lord by taking her to live in the Temple as a three-year old. That is where she grew up in purity and prayer as she prepared to become the Living Temple of the Lord, the Theotokos who would contain the Son of God in her womb as His Virgin Mother.  Her parents had learned through decades of bitter disappointment not to rely on what they could accomplish, but instead to trust in the Lord’s mercy to bless them as He had blessed Abraham and Sarah. He did so with a daughter who would give birth to the Messiah.  By His grace, they fulfilled their role in the life of Israel in ways well beyond their, or anyone else’s, expectations.

In today’s epistle reading, St. Paul argues against fellow Christians of Jewish heritage who thought that Gentile converts had to be circumcised in obedience to the Old Testament law before becoming Christians.  He rejected that practice, “For in Christ Jesus, neither circumcision counts for anything, nor uncircumcision, but a new creation.”  As St. Paul taught, “you are all sons of God through faith in Christ Jesus.  For as many of you as were baptized into Christ have put on Christ.  There is neither Jew nor Greek, there is neither slave nor free, there is neither male nor female; for you are all one in Christ Jesus. And if you are Christ’s, then you are Abraham’s seed, and heirs according to the promise.” (Gal. 3: 26-29) By conquering death through His Cross and resurrection, the Savior has opened the gates of Paradise to all who respond to Him with faith.  As He said to Nicodemus in today’s gospel reading, “For God so loved the world that He gave His only Son, that whoever believes in Him should not perish but have eternal life.  For God sent His Son into the world, not to condemn the world, but that the world might be saved through Him.”

Our Lord was lifted up upon the Cross because even the strictest obedience to the Old Testament law could never have made us “partakers of the divine nature.”  The cycle of birth and the grave had reigned ever since the corruption of our first parents both for those who had the law and for those who did not. The path out of slavery to corruption was not through our ability to obey rules to some extent, but in being healed by embracing the merciful love of God Who blessed an elderly, righteous Jewish couple to have a long-awaited daughter named Mary.   She, in turn, received the uniquely gracious blessing to become the Virgin Mother of the New Adam, Who would set right all that the first Adam had gotten wrong.  The Theotokos is the New Eve through whom Life came into the world.  Her birth foreshadows the coming of the Savior.

In Christ’s conversation with Nicodemus, a legalistic Pharisee, He spoke not of law, but of the life into which we enter by faith, saying that “as Moses lifted up the serpent in the wilderness, so must the Son of man be lifted up, that whoever believes in Him should not perish but have eternal life.”  He refers here to an event described in Numbers 21:8-9, when the Hebrews were saved from deadly snake bites when they looked at the bronze snake held up by Moses in the desert.  Christ does not describe Moses here in connection with the Ten Commandments, but instead as foretelling His victory over death through the Cross. Against those who trusted in their ability to obey laws, St. Paul wrote, “far be it from me to glory except in the cross of our Lord Jesus Christ, by which the world has been crucified to me and I to the world.”  Through His Cross, Christ has liberated us so that we may become “a new creation,” being born again into the eternal life that He has brought to the world.  We must take up our crosses in order to find the healing of our souls in Him.

Joachim and Anna bore the heavy cross of the pain of childlessness.  When God miraculously blessed them with the conception and birth of Mary, they offered her to grow up in the Temple.  After decades of disappointment, they knew that God’s blessing was not their private possession, but a calling for them to be faithful in offering even the greatest desire of their hearts for the fulfillment of God’s gracious purposes.  They surely bore a cross in leaving their young daughter in the Temple, where she prepared to answer the strange calling to become the Virgin Mother of the Son of God.  As St. Symeon declared to the Theotokos, “a sword will pierce your own soul also.”  (Luke 2:35) Her unbelievably heavy cross was to see Him lifted up upon the Cross for the salvation of the world.

As members of Christ’s Body, the Church, we reap the blessings of the faithful obedience of Joachim and Anna and of their daughter the Theotokos.  We must now use our freedom to take up our own crosses so that we may unite ourselves evermore fully to Christ in His great Self-Offering for the salvation of the world.  It is only by dying to the old ways of death, with which we all  remain far too familiar, that we will be able to live as His “new creation.”  We will condemn only ourselves if we celebrate the faithfulness of the Theotokos and her parents while not following their righteous examples.  They were not self-righteous legalists, but humbly entrusted themselves to God in ways that required deep faith and were in no way easy.  We will not receive Christ’s healing for our souls if we view the Cross as an artifact of ancient history to be taken for granted, a means of building ourselves up over other people, or a weapon for gaining power in this world.

Regardless of what we say we believe, we will remain enslaved to the corruption of the first Adam and Eve if we refuse to endure the daily struggle of crucifying the disordered desires and unholy habits that do nothing but keep us wedded to the very misery and despair from which Christ came to set us free.  The birth of the New Eve foreshadows our salvation in the New Adam through His Cross.  “For God sent His Son into the world, not to condemn the world, but that the world might be saved through Him.”  Let us participate personally in His salvation not by attempting to justify or exalt ourselves in any way, but instead by freely taking up our crosses as we turn away from all that distracts us from entering into the great joy of the fulfillment of the ancient promises to Abraham to which we are all heirs by faith.   “For in Christ Jesus, neither circumcision counts for anything, nor uncircumcision, but a new creation.”  That is precisely what our Lord calls us all to become by His grace.