A priest and his 3 small kids died in a fire

In Tver region (Russia, 100 miles north of Moscow) a priest, his three small kids and wife died in a fire in their house in strange circumstances. Local people and priests from neighboring towns think that this was not an accident. Several months ago, a priest Andrey Nikolaev was pleading for help through mass-media.
Translated by V.Zarayskiy | 03 December 2006

In Tver region (Russia, 100 miles north of Moscow) a priest, his three small kids and wife died in a fire in their house in strange circumstances. Local people and priests from neighboring towns think that this was not an accident. Several months ago, a priest Andrey Nikolaev was pleading for help through mass-media.

“Fr. Andrey Nikolaev every night is guarding his church with a rifle. Local drunkards several times robbed the church and sold stolen to get money for alcohol. Majority of the villagers are alcoholics and they are exchanging alcohol even for walls of their own houses.

The priest despite much hardship saved some locals and returned them back to normal life but too many in the village hate him for an active struggle with alcoholism. Not long time ago the fire was started at priest’s house but nobody was hurt. The priest is asking for help since he cannot protect himself: “I cannot shoot the person – I’ll shoot in the air but the robber will shoot me”
His pleas for help left unanswered and in the night of Dec 1st he and his three kids died in a house fire. The body of his wife is still not found. 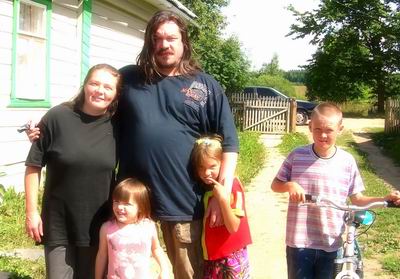