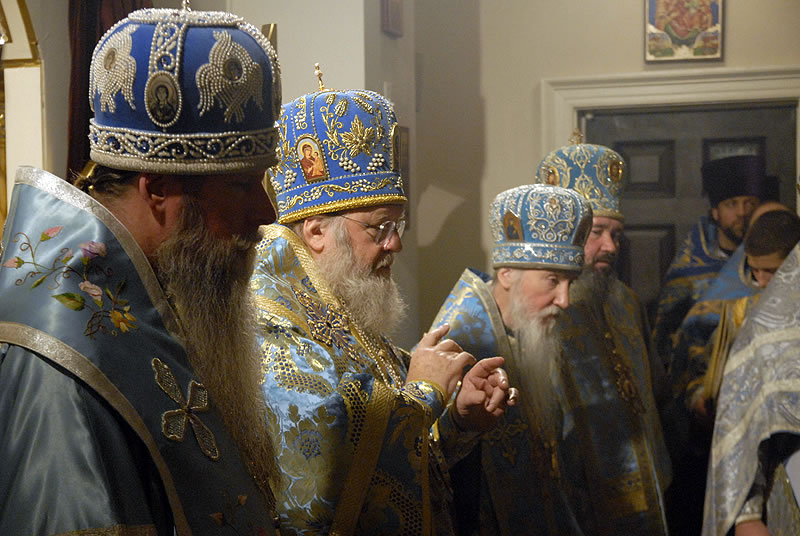 Before Holy Communion, Archbishop Justinian read a sermon to the many worshipers. After a moleben before the main holy icon of the Russian diaspora, Metropolitan Hilarion gave Prince Vladimir Kirillovich Galitzine, Warden of the Cathedral for many years, the Kursk-Root Icon Medal, First Degree, and Adam Nikolaevich Krotov, his colleague, a decree of blessing from the President of the Synod of Bishops.

Beginning later that day, the archpastors began their meetings, hearing the report of Archbishop Mark on the Russian Ecclesiastical Mission in Jerusalem; the report of Protopriest Andre Papkov, President of the Church Liturgical Commission of the Synod of Bishops; Protopriest Andrei Sommer, Vice President of the Synodal Youth Department; Priest Nicholas Olhovsky, Caretaker of the Kursk-Root Icon of the Mother of God; Eugene Grigoriak, Treasurer of the Synod of Bishops; Deacon Ephraim Willmarth, Assistant Rector of Holy Trinity Seminary in Jordanville, NY; and members of a committee appointed by the First Hierarch to study matters concerning the building of the spiritual and administrative headquarters of our Church and possible solutions. The committee included Mark Selawry, Alexander Kulesha and Alexander Karpov, with Peter Vladimirovich Derby and Nicholas Ohotin serving as consultants.The reports were carefully heard and a serious discussion regarding many questions of church life followed.

Having discussed also the celebration of the 400th anniversary of the Romanov Dynasty, the archpastors decreed:

1. To decree to the abbots and abbesses and rectors of the monasteries and parishes of the Russian Orthodox Church Outside of Russia to commemorate the Royal Passion-Bearers during the dismissal of Liturgies in the following manner: “The Holy Righteous Passion-Bearers Tsar-Martyr Nicholas, Tsarina Alexandra, Tsarevich Alexei, Tsarevnas Olga, Tatiana, Maria and Anastasia; Holy Martyrs Grand Duchess Elizabeth and Nun Barbara and those martyred with them,” to commence on January 1/14 until the end of 2013.

2. And before the veneration of the cross during the first Sunday of Great Lent, to sing Eternal Memory to the Righteous Tsars and Tsarinas of the Romanov Dynasty and to “all members of the family of the All Russian Royal House,” in accordance with the Rite of the Triumph of Orthodoxy.

3. The general celebration of the 400th anniversary of the Romanov Dynasty will be held at Holy Trinity Cathedral in Toronto, Canada, on September 5-8, 2013, to coincide with a Russian Orthodox conference and a session of the Synod of Bishops of the Russian Orthodox Church Outside of Russia.

At the proposal of Bishop Peter, the Synod decided: “To instruct the clergymen of all monasteries and churches of the Russian Church Abroad, on the Sunday before the Nativity of Christ, to prayerfully mark the 200th anniversary of the victory over Napoleon, commemorating Righteous Tsar Alexander Pavlovich and all the Orthodox leaders and warriors who laid down their lives for the Faith, the Tsar and Fatherland.”

Among other administrative matters, intercessions by the archpastors for ecclesiastical awards to clergymen and laity were discussed.