The great and wondrous summer holiday - the Dormition of the Holy Mother of God - from olden times has been regarded by Orthodox Christians in the light of a second Pascha.
Fr Rostislav Sheniloff | 26 August 2010

The great and wondrous summer holiday – the Dormition of the Holy Mother of God – from olden times has been regarded by Orthodox Christians in the light of a second Pascha.

Pascha itself – the Holy Resurrection of Christ – was a turning point in the history of mankind. With His resurrection the Lord Jesus Christ opened for us the gates of paradise, the gates of that place of bliss which was originally intended for man – the crown of all creation, and which became closed to us because of the sin of pride and disobedience to God on the part of our forebears. 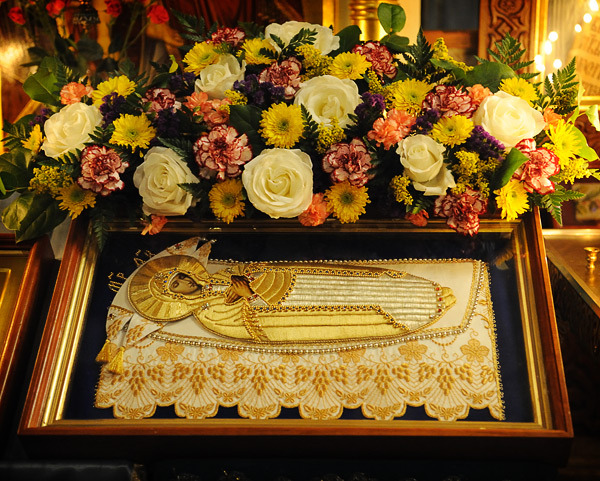 But centuries passed, and God Himself came down to earth, became incarnate in the form of man, and once again opened to us the gates of paradise, having manifested – instead of pride – the greatest humility, instead of disobedience – complete obedience even unto death on the cross, and instead of sin He – the most pure and absolutely sinless – took upon Himself the burden of all the sins of the world.

With these three qualities – humbleness, obedience and purity of nature – the Lord showed us the highest example of what man can be like, of what he should be like, and of what the Creator intended him to be.

However, we may well think, dear brethren, that only God incarnate, the Lord Jesus Christ, could be such an ideal man, while a mere mortal could never attain such perfection. But to show us the error of such thinking, we have before us the Mother of God, Who is the highest example of the attainment of such perfection, and Who teaches us with Her entire life and Her dormition that man can attain perfection precisely by means of these three qualities – humbleness, obedience to the will of God, and moral purity.

Concerning the extraordinary purity of the Holy Virgin – we are presented with proof of it from Her very birth. How pure She must have been if the high priest led Her, a mere three-year-old child, and a female at that, into the holiest of holies!

In the prayers before communion the Church warns us to beware of partaking of the Holy Mysteries while being in a state of uncleanliness, in order not to burn ourselves, for these particles of Divinity are fiery. How pure must have been the Holy Virgin, if She contained God Himself in Her womb and was not burned!

The Gospel tells us that nothing unclean will enter the Heavenly Realm. How pure must have been the Holy Virgin, if She not only entered the Kingdom of Heaven, but having passed through the gates of death like all mortals, She was taken up into heaven together with Her body and placed right next to the Throne of the triunal God Himself!
In the Dormition of the Mother of God, it is these three qualities of hers which are commemorated – humbleness, obedience and purity, – which have elevated Her, a mere mortal, above all earthly creatures and above the entire heavenly host, which have made Her more honorable than the cherubim and more glorious beyond compare than the seraphim, which have made Her the Queen of heaven and earth.

Let us try, dear brethren, to emulate the high example of the Mother of God and, while celebrating Her wondrous holiday, let us remember that even in Her Dormition She never abandons us. Amen.

On this Sunday the Church commemorates the Holy Forefathers, i.e. the earthly ancestors of our Lord Jesus Christ,…