Secularism, therefore, is not so much the absence of religion as it is the transformation of religion into something un-theological; it is the stripping of religions of their theology and thus of their identity. And this is because, despite popular opinion, secular society wants religion and needs religion. But it wants religion on its own terms. Many secularists are happy to entertain a belief in a ‘higher power’, and they may be impressed and even moved by religious rites and rituals, but only for as long as this ‘higher power’, these rites and rituals, do not challenge their secular sensibilities, their own internet-assembled philosophy.
Priest Vassilios Papavassiliou | 23 August 2009

“I believe that pluralistic secularism, in the long run, is a more deadly poison than straightforward persecution.”

“Religion” and “Secularism”. Many people employ these terms without a clear understanding of either of them. It is quite commonplace to think of religion and secularism as two opposite extremes, and to think of secularism as the absence of religion, as an ethos that is utterly non-religious or atheistic. Religious leaders often imply or even openly state that all religions should put aside their theological differences in order to unite against the problem of secularism, the ‘common enemy’ of religion. This ecumenist, feeble and utterly erroneous view of religion ignores the fact that ‘religion’ is not any one particular system of belief or any one particular ethos. A religion which teaches ‘love your enemy’ can hardly be placed under the same category as a religion which exhorts people to cut off the hand of a thief. ‘Religion’ as a specific world-view in and of itself does not exist and has never existed. Furthermore, this ecumenist view of religion fails to recognise the true nature of secularism – which is not, in reality, anti-religious, but rather is anti-theological – and, more to the point, that ecumenism is itself a product of secularism. By putting all religions, faiths and denominations into one category under the label of ‘religion’, we turn religion into something very vague indeed, something unidentifiable, in which all differences in theology, belief, practice and morality are ignored or denied. Once these theologies are removed, once these religions have, in other words, lost their identity, they can then adopt a secular world-view, and thus religion can begin to ‘work with’ secular society, having adopted a common secular ethos and system of belief in place of its own unique and, sometimes, divisive religious one. Equality as understood by a religious ethos, for example, is abandoned for a secular understanding of equality (the ordination of women or the blessing of homosexual marriage etc.) Religion thus becomes a sanction of secular society’s beliefs and aims, a ‘side-kick’ to secular society. 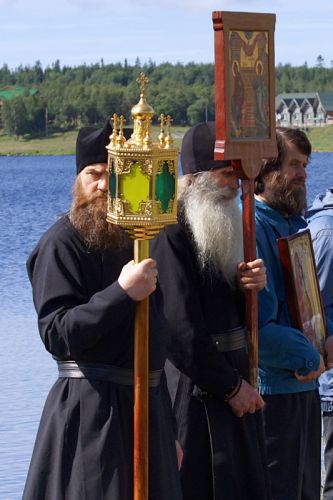 Secularism, therefore, is not so much the absence of religion as it is the transformation of religion into something un-theological; it is the stripping of religions of their theology and thus of their identity. And this is because, despite popular opinion, secular society wants religion and needs religion. But it wants religion on its own terms. Many secularists are happy to entertain a belief in a ‘higher power’, and they may be impressed and even moved by religious rites and rituals, but only for as long as this ‘higher power’, these rites and rituals, do not challenge their secular sensibilities, their own internet-assembled philosophy. And so the secularist seeks to remove from religion all of the offending edges which make religion unacceptable and wrong to his secular world-view in order to make religion more palatable. And this is what makes the effects of secularism so pernicious. Secularism does not persecute or ignore religion, rather it seeks to change it from within and, ultimately, to eradicate it by making it virtually indistinguishable from a secular organisation.

Fr Alexander Schmemann touched upon this trait of secularism when he astutely described secularism as “..a world view and consequently a way of life in which the basic aspects of human existence – such as family, education, science, profession, art, etc. – not only are not rooted in or related to religious faith, but in which the very necessity or possibility of such a connection is denied. The secular areas of life are thought of as autonomous, i.e., governed by their own values, principles and motivations, different from the religious ones… secularism is not at all anti-religious or atheistic, but, on the contrary implies as its almost necessary element a definite view of religion…” He goes on to say that even if he is ‘religious’, a secularist’s “understanding of… marriage and family, home and profession, and ultimately his religious obligations themselves, is derived not from the creed he confesses in church, not from his professed belief in the Incarnation, Death and Resurrection of Christ…but from ‘philosophies of life’, that is, ideas and convictions having virtually nothing to do with that creed, if not directly opposed to it”.[1]

And is this kind of secularization not infecting our Church also? The ‘privatization’ of our sacraments is the most obvious example: marriage expresses not the mystery of the Church, but the romantic love and personality of the couple; baptism expresses not the baptized person’s death, burial and resurrection with Christ and his becoming “an honourable member of the Church and a hallowed vessel”, but the celebration of a child’s birth (or even a means of enrolling the child into a faith school). Funerals are seen as having almost nothing to do with the Resurrection and are instead being regarded as a solemn celebration of the departed person’s life.

I found it remarkable when a baptised Orthodox Christian, who was disparaging the gospels as fairy tales and vehemently condemning the Orthodox Church as an oppressive institution, told me that despite all of that, she would like to get married in the Orthodox Church. For her, as for many others, there was nothing schizophrenic about this, because for the secularist, a church wedding has nothing to do with theology, nothing to do with the Church as a Community, as the Body of Christ; it is all about the couple, their family and guests, and nothing else. It is therefore not surprising that ‘Here Comes the Bride’ or some other dreadful, soppy piece of music is expected to be played instead of ‘It is truly right to call you blessed…’. It is not surprising that the groom should demand that his Anglican best friend be allowed to act as best man or to act as godparent at his child’s baptism. It is not surprising that the service of baptism goes by virtually unnoticed by family and friends at christenings because they are more interested in pulling faces at the baby and putting a silly hat on his head and taking photos of him. It is not surprising that the bereaved should demand that secular songs loved by the departed in his life should be heard at funerals. I recall one Orthodox funeral at which the dismissal hymns, which are there for very good reason,[2] were replaced by ‘The Show Must Go On’ by Queen, though perhaps ‘Losing My Religion’ by R.E.M. would have been more appropriate.

The Church must not yield to the temptation to be more ‘accessible’ or acceptable to secular society by adopting secular society’s tenets and mores. If the Church takes this path, the Church will become just another secular institution trying to offer feeble, short-term human solutions to eternal problems in the ‘market of “spiritual” happiness’. Our beliefs, practices, ethos and way of life must be grounded in our theology. The Church’s role is not to follow society, not to conform to the darkness, but to lead its people out of darkness and into the light. Its role remains and must always remain the same as it has always been: to enlighten the world and, when necessary (and it has always been necessary), to challenge the world and call it to account, to offer the world to God and to raise it up to heaven. This it can do only for as long as heaven is its goal, and not the aims and goals of secularism, even when those aims and goals are good. What our secular society needs, though it will never admit it, is a Christianity that is not ashamed of its identity, not ashamed of its theology, a Christianity that follows its own spiritual and “moral compass” and takes society with it, especially when society’s moral compass is pointing south of heaven.

[2] It is worth noting the pastoral role these hymns play. These hymns, by which the bereaved are invited to give the last kiss of farewell to the departed (though in reality they are nearly always being invited to kiss a closed coffin) are chanted according to exactly the same melody as the hymn of the Vespers of Great Friday, ‘When from the Tree the Arimathean took you down as a dead body, O Christ…’, reminding the bereaved (not through words, but through melody) that the departed is following Christ through death to the Resurrection.