A Tiny Medieval Town With a Rich Liturgical Life

As for the parish: it began when the decision was made by the parishioners of our Lady Joy of All the Sorrowful ( Paris ) to come down and celebrate Liturgy once a month. Gradually, we increased the regularity of services. Finally, in 1998 we decided to serve daily. In order to do this, we rented a small, historical, and run-down 12th century building. The first floor became the parish hall and the second floor became the church. Our parish is extremely diverse. At this time, we have twelve nationalities and thirty families at our church.
| 13 May 2007 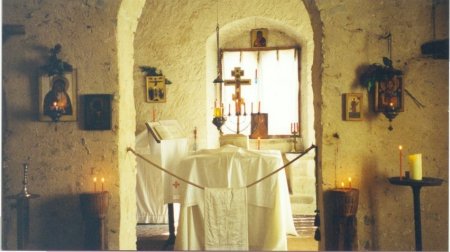 A brief history of the parish of St. Germain of Auxerre in Vezelay

In 1978 three Orthodox families, French and Russian, gathered in Vezelay to pray. Soon joined by five other families, God blessed this initiative, which has now lasted more than 20 years. Throughout these years, Fr. Stephen Headley, rector of the parish of Our Lady Joy of All the Sorrowful in Paris , came at least once every two months to celebrate the Eucharist. In 1998, with his wife Anne, he took up definitive residence in Vezelay. Since then, in addition to other services, there has been daily Vespers.

During the first few years, Fr. Stephen being committed to his Parisian parish, communion was given to the parish by Deacon Nicholas and many Christmases were celebrated by Father Simeon, Father Ephrem, Father George and Father Alexander from Paris, to whom we are forever grateful.

From 1978 to 1986, the place of prayer was occasionally changed. First we met in the attic of the deacon of our parish, later in the house of one of the parishioners, and then in the chapel of the Franciscans Sisters in the building adjacent to our present building.

Finally in 1986 the village gave us a temporary lease to use the “Romanesque House,” the oldest private dwelling in Vйzelay. It is situated along an alley running off the southwest corner of the square that faces the medieval Basilica of Saint Mary Magdalene. The last owner and resident of the house, living there until the 1930s, made wooden shoes. Uninhabited, it gradually deteriorated. Much labor was required of the parish to make it suitable for renewed use. The upper room of the house, with its several romanesque windows, has been made into a chapel with an iconostasis, while the lower room and enclosed garden serve for parish social purposes and to house a small library. Because we do not yet own the building, the altar awaits solemn consecration. Though the house is modest in its dimensions, the chapel can hold as many as 60 people.

The need to attach the parish to one of the historical patriarchates was felt early on. The eucharistic community, wishing to become a parish, addressed an appeal to the Moscow Patriarchate. Metropolitan Philaret of Minsk, then head of the External Affairs Department, accepted our request in 1986.

In 1991 we were blessed in yet another way when the Roman Catholic archbishop of Auxerre gave the parish relics of St. Germain of Auxerre, a fifth century saint. Along with St Stephen, the first Christian martyr, St. Germain became patron of our parish. An icon was painted for us by Bernard Frinking and a Liturgy celebrated on the tomb of St. Germain in the crypt of the cathedral in Auxerre. Afterwards a large number of people carrying the icon and relics walked the 23 miles from Auxerre to Vйzelay — a two-day journey.

Since our founding, four other families have joined us, a dozen children have been baptized, and a number of catechumens prepared to enter the Church. Our participation in local life, the friendships made there, the daily Vespers and life in the Vigil, have made Orthodoxy — and the cassock of Father Stephen — an integral part of Vйzelay daily life.

It is by and large a serene rural life yet punctuated by events linking us to the larger world. We have held an annual seminar in icon painting every year since 1990, with Bernard Frinking as teacher. In collaboration with the Community of Jerusalem, since 1996, there has been an annual conference on Christian anthropology. In 1999, a conference on “Sacraments of Healing” was sponsored by the Orthodox Peace Fellowship and led by Bishop Kallistos from Oxford . Another Orthodox Peace Fellowship conference is planned for the year 2000. We hope our parish can become more and more a center of Orthodox life and dialogue.

Q. Fr. Stephen, please tell us about Vezelay and your parish.

A. There are five main pilgrimage sites in France : Lourdes , Notre Dame, Mont St. Michel , Chartre and Vezelay. Vezelay is located in rural Northern Burgundy . It receives over one million visitors a year – and not just Orthodox pilgrims. It is a starting point for the pilgrimage to St. James of Compostela. Also, Mary Magdalene’s relics were first venerated at the abbey of Vйzelay in Burgundy . They are to this day located at Vezelay. 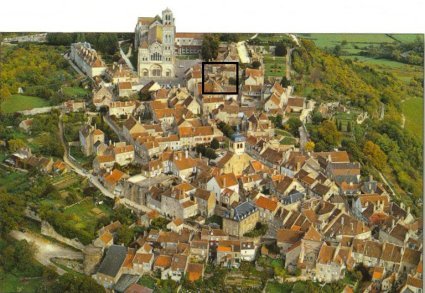 As for the parish: it began when the decision was made by the parishioners of our Lady Joy of All the Sorrowful ( Paris ) to come down and celebrate Liturgy once a month. Gradually, we increased the regularity of services. Finally, in 1998 we decided to serve daily. In order to do this, we rented a small, historical, and run-down 12th century building. The first floor became the parish hall and the second floor became the church. Our parish is extremely diverse. At this time, we have twelve nationalities and thirty families at our church.

Q. Do you still feel attached to the Russian tradition, to the Korsun eparchia?

A. Even though we have very few Russians in our parish, I still feel we are attached to the tradition. The people at our parish are by no means Russian in terms of heritage and roots or deep knowledge of Russian culture and history. Yet they know some things about it and, moreover, hold respect for the traditions. Our Liturgical language is French (we have a full set of Menaia, Triod, and Oktoikh). However, our second priest is Russian and we also have an English nun. So you see we are quite diverse. Also, our parishioners live and work far away, but they come to pray together not only on Saturdays and Sundays. We serve Liturgy every day.

This summer, we commissioned fr. Simon to paint the life St. Herman in the Narthex of the church. These paintings give a wonderfully clear idea of who St. Herman was. We were given the relics of St. Germain by the Catholic Church a while ago. So, slowly, but surely, the church is becoming more and more settled. Finally, we were given use of a large parish house, so we also have pilgrims. People come from afar to stay and have a sort of spiritual retreat, time to rest and recharge.

Q. Now, could you speak a little about yourself and your background?

A. I was born in Valley Forge, near Philadelphia . As a child, my parents sent me to an Episcopalian school. Nevertheless, my family was never religious. What really helped me in thinking about life and shaping my faith was 19th century literature. Another event in my life – the death of my father when I was only eight years old – also had a profound impact. But I had the protection of God and when I went to get my BA in Oriental languages and literature, I had such wonderful professors as fr. Alexander Shmeman and fr. John Meyendorff – in addition to many good friends. I came to Orthodoxy after trying to learn to pray all by myself, reading Philokalia and my contacts with a Lebanese priest in Stroudsburg (eastern Pennsylvania ). There were no moments as dramatic and illuminating as those described by Nilus in the text “Through the eastern door”, rather there was an immediate sense of serenity in the community prayer of the church and in the joy of the homography of Easter which carried over into the daily private prayers at home, the feeling that the prayer of the church provided a full path towards the Holy Trinity. The psychological realism of the ascetical tradition is fully convincing in fighting against the distractions and temptations that discourage us on the way. Then I came back to study at St. Vladimir’s Seminary for two years to get my master’s. Afterwards, upon receiving a scholarship to study sociology, I focused on non-Christian prayer as the subject of my research. Thus, I spent two years at St. Serges. At this point, I got married, had a son. I went on to study social anthropology and did my doctorate work in a Javanese village in conjunction with the National Center for Scientific Research. I have authored six books. The first three were on the anthropology of prayer, the fourth – on anthropology of purification, fifth – on the myths of “half-people”, sixth – on the impact of ideology on Islam in Java. Now, I am studying Russia as part of a comparative study on the ideology of individualism and faith. The core idea of the study can be summed up in this quote: “Everything radiates from the Altar, from the mystery of how the Holy Spirit de-individualizes us and puts us into a relationship with God.” This is best observed starting from the Altar, because then we have layers working out from there – parish life to social work to, finally, practice of orthodox ethos, such as fasting and pilgrimages. The value of the book is to show Westerners real church life – how it can be pure and un-secularized, intense, but without producing pluralism. Also, church in Western Europe must not rush to become local. It needs to stay connected to the “ Mother Church ”, as if by an umbilical cord. On the other hand, while living church life locally, people shouldn’t confuse church with the local ethnicity. If this happens, secularization will be ready to take the upper hand.