A (too) Brief Orthodox Approach to Islam

"God is the Lord and has revealed Himself to us, blessed is He that comes in the Name of the Lord!" This beautiful hymn, sung at the Orthodox matins service (and a conglomeration of different Psalms) is a significant, if not the most important, starting point for our conversations about God. When we enter a theological discussion, we do not begin with a generic belief that there is "a" God-some nameless higher power, and move from there to God's plan of salvation ultimately fulfilled in Jesus Christ.
| 09 September 2008 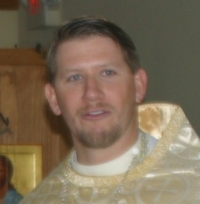 “God is the Lord and has revealed Himself to us, blessed is He that comes in the Name of the Lord!”  This beautiful hymn, sung at the Orthodox matins service (and a conglomeration of different Psalms) is a significant, if not the most important, starting point for our conversations about God.  When we enter a theological discussion, we do not begin with a generic belief that there is “a” God-some nameless higher power, and move from there to God’s plan of salvation ultimately fulfilled in Jesus Christ.  Rather, we do and must begin with Jesus himself, God incarnate-because the Lord, He is God, and has revealed Himself by His incarnation.

At the most basic level, here is where we part significant ways with Islam-we believe that God became man.  While the Koran indicates that Jesus existed (Isa, they call Him) as the son of Mary (Miriam), and was a prophet, the Koran also seems to say that Jesus did not actually die on the cross; rather he was substituted out.  So, prophet-yes.  Man-yes.  Crucified and raised-no.

Still, I must fight a propensity always to linger in areas of divergence.  While we must (at some point, and with certain clarity, yet with just the right words) firmly proclaim our faith in Jesus Christ-the One who is and who was and who is to come-we must also remember that God’s footprint is everywhere, as one of my friends at the OCMC (http://www.ocmc.org/) Fr David Rucker always reminds me.  Wherever there is good, there is God, because God alone is good.  Where there is beauty, God is there, because He is the source of beauty.  Where there is generosity, God is there because he is the font of mercy.  Where there is order and discipline, God is there, because He is Order.  These aspects of God and of true life can be found, sometimes in seed form, sometimes in flower, in Islam and Islamic culture.

So, we must be glad that the Koran proclaims that God is merciful.  Here we can agree.  But we must at some point ask one another what mercy is.  For us, the definition of mercy is Christ crucified-and raised.  We must rejoice that the Koran recognizes that Jesus was born of Mary, and that he was a prophet.  The Scriptures are clear on this.  Even the woman at the well cried out, “I see, sir, that you are a prophet!”  But sometime and somehow we must ask the question, “What is a prophet?”  At the most basic level, a prophet is one who speaks the truth-especially about God.  So, if Jesus made statements equating himself to God (everytime he said “I AM”-unfortunately translated “It is I” in the Gospels, He equated Himself to God who told Moses “I AM sent you”.), he would also be either delusional (if He didn’t know what He was saying) or a liar (if He did).  In either case, why follow a deluded individual or a liar?

We must also rejoice that Muslims seem to take their faith very, very seriously.  St Paul’s words come to mind-“I see that you are a religious people!”  We, in totally honest fact, are put to shame by their ascetic disciplines-7 times of devoted prayer daily, strict adherence to their fasting, almsgiving, hospitality, pilgrimage, and fierce battle against the riptide of secularism.  In these areas especially, we would do well to imitate them in their outward efforts-our own, of course, rooted specifically, intentionally, and absolutely in Jesus Christ.

While we certainly lament (weak word choice) Islamic extremists, we must certainly recognize that we have our own Orthodox Christian fundamentalists, and certainly self-proclaimed non-Orthodox fundamentalist Christians-folks who bomb abortion clinics and kill abortion doctors come to mind.  What we must ultimately seek and address is the truth, and be conformed to it-or rather to Him.  If we would but take this step seriously-all of us Orthodox Christians-our ‘battle’ would be a much easier one, because the Truth of our faith would shine in deeds, not just words.