A TYPOLOGY OF CONVERTS: Beware of Those Running Away

My approach to this has been to tell any potential convert to take some time, to hang around the church for a year or so, seeing what it is like to be Orthodox, and finally to make sure it is Orthodoxy they are coming to, and not something else they are fleeing from. Baron von Hugel told an Anglican niece who wanted to become Catholic that she should learn the strengths of Anglicanism, and not become Catholic until it would be clearly a sin for her to remain in her own tradition, until it was completely necessary for her to convert. This seems about right.
| 24 September 2009

Source: The official website of the Orthodox Church in America’s Diocese of New England

When I joined the Orthodox Church twelve years ago I made a decision that I had been circling for twenty-one years. It became necessary because I realized that my only reason for remaining a Catholic was what other people might think if I became Orthodox; at that point it was no longer really a choice. I believed in Orthodoxy, worshipped as often as I could in Orthodox churches, and remaining Catholic wasn’t morally possible.

At the same time, I dreaded becoming a convert. Let me explain what I mean: I had known people who converted to Catholicism whose version of Catholicism made Torquemada look laid back. It didn’t feel at all like the healthy, lived-in sort of Catholicism I grew up with. There was an enthusiasm about many converts which I distrusted. I took some consolation in the fact that it had taken me so long to move toward Orthodoxy may be this would protect me. I had become aware of Orthodoxy’s many institutional problems, and, despite my disagreement with Catholic ecclesiology, I was aware of Catholicism’s many strengths. But there was no ambivalence in the mentality of some converts, no sense of gray. It was so “either-or” – ish. That wasn’t me.

Six years after I became Orthodox I went to seminary, and was later ordained a priest. This has given me plenty of time to know converts to Orthodoxy and a modest ability to generalize about them, with at least a little authority. My hunch is that what I have seen applies to converts to any religion (or, for that matter, any deeply held system of belief, political or philosophical). 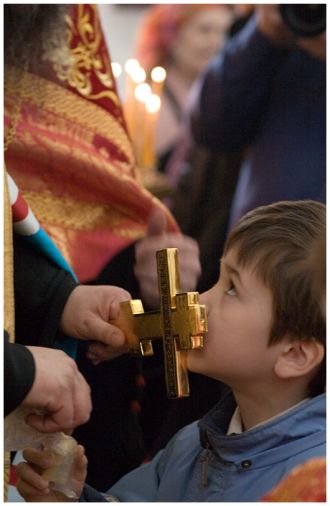 Half of the Orthodox seminarians I met came from non-Orthodox backgrounds, and the range was surprising. Several were from evangelical or fundamentalist backgrounds; a few came from Catholic homes; there were a couple of Jews, and one Lutheran; there were some former Anglicans, and one of my classmates spent most of the year before becoming Orthodox in a Buddhist monastery. Later on I was to meet a number of converts in parishes, and I saw in all of them  seminarians and parishioners alike  a couple of patterns.

One is that in most converts there is a profound sense of gratitude: after years of searching they have found a place that seems right; they have experienced a kind of homecoming. That sense of “a place that seems right” can be found in almost all converts, but in a significant number it does not involve gratitude so much as a form of fleeing, a refuge, a need for the feeling of certainty which s arguably neurotic. It is one thing to sing, as the church does at the end of the liturgy, “We have seen the true Light! We have received the heavenly Spirit! We have found the true Faith, worshipping the undivided Trinity, who has saved us.” It is another thing to add, “And the true faith means only what I say it means, and any questions about this, or disagreements with me, are heretical.”

There are certainly non-negotiable Christian teachings. An Orthodox who proposes a unitarian theology, or denies Christ’s eucharistic presence, is not an Orthodox. But no one seems to be arguing about these things. I have, however, seen nearly hysterical fury directed at bishops who dare to say that the fact that Orthodoxy ordains only men to the priesthood should not be seen as a subject closed to discussion, or at those priests who use “you” rather than “thee” when addressing God in liturgical prayer.

The problem here is that some people do not convert to a belief so much as they convert away from another. There is a certain sort of Catholic who, by becoming Orthodox, has joined the church that did not go through what is often called “the chaos” following Vatican II. They are sometimes disappointed when they meet bishops who are not as authoritarian as they think bishops should be, and they are especially upset at any notion that Orthodox liturgy might undergo any change of any sort in any way. There is a certain sort of Episcopalian who in joining Orthodoxy joins the church that does not ordain women, and the idea that the subject might be discussed leaves them furious, as if the thought alone meant a betrayal of Orthodoxy.

Given the state of many churches these days, I can understand some of what worries these people. Referring to God as “Father-Mother” sounds and should sound weird to anyone with ears to hear, and I have been to some Catholic liturgies that were downright awful. (I have also been to some Orthodox liturgies that were, from an aesthetic point of view, pretty dreadful.) A great many of the people who defend the ordination of women do so for reasons that have more to do with cultural politics than with the deepest needs of the church. A lot of the people in America’s mainstream churches buy into a primarily secular approach to every moral and ethical question (and the Orthodox are not immune from this).

At the same time, if we believe that Christ has overcome death itself, what do we have to fear? Almost any question can be approached with clarity, and all can be approached with charity. Where the church’s tradition is plainly against the drift of the culture it must be firm, but it also owes the culture an explanation, and this must be offered with compassion. The need to be right which fuels so much argument has nothing to do with a genuine love for the truth, but rather with the protection of the ego.

My approach to this has been to tell any potential convert to take some time, to hang around the church for a year or so, seeing what it is like to be Orthodox, and finally to make sure it is Orthodoxy they are coming to, and not something else they are fleeing from. Baron von Hugel told an Anglican niece who wanted to become Catholic that she should learn the strengths of Anglicanism, and not become Catholic until it would be clearly a sin for her to remain in her own tradition, until it was completely necessary for her to convert. This seems about right. People who move from one tradition to another for negative reasons bring all those negative reasons with them.

A few weeks ago I was talking with a priest friend about the times when you have to bend liturgical rules a little to accommodate people pastorally. “I think we’ll be OK on judgment day,” he said, “as long as God isn’t an Orthodox convert.”