The Act of Canonical Communion between the Russian Orthodox Church in Russia and abroad was signed at Moscow's Christ the Savior Cathedral on Thursday morning.
admin | 18 May 2007 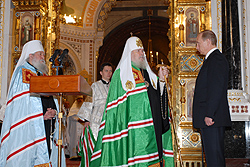 The Act of Canonical Communion between the
Russian Orthodox Church in Russia and abroad was signed at Moscow’s
Christ the Savior Cathedral on Thursday morning.

The historic document was signed by Patriarch Alexy II of Moscow and
All Russia and by First Hierarch of the Russian Orthodox Church Outside
of Russia Metropolitan Laurus.

The ceremony is being attended by President Vladimir Putin, several
thousands Orthodox believers, including believers who have arrived from
abroad, and about 500 journalists.

The Christ the Savior Cathedral is decorated with white flowers – a
traditional adornment used on the Ascension holiday to symbolize
renewal. 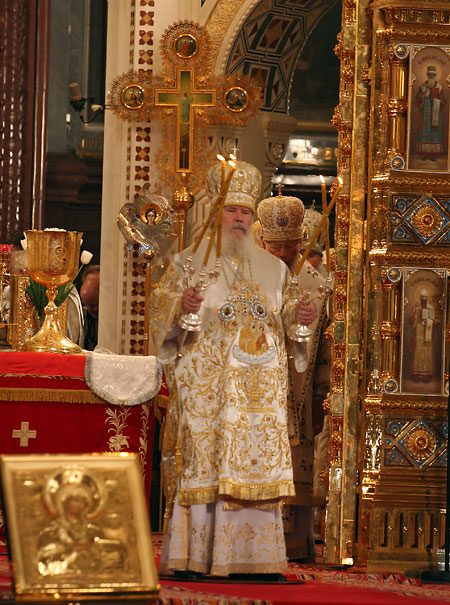 The signing of the Act of Canonical Communion symbolizes the return of
the Russian Orthodox Church Outside of Russia into the fold of the
Moscow Patriarchate and of the whole of the Orthodox world, which until
recently did not recognize the Russian Church abroad. From now onwards,
being part of the Mother Church, parishioners of the Russian Orthodox
Church abroad will have the right to take communion at all of the
world’s Orthodox churches, while its clergy gains the right to serve
jointly with the hierarchs and clergy of all 15 local Orthodox Churches.

The Russian Orthodox Church Outside of Russia will as previously be run
by its own Council of Bishops – “its supreme ecclesiastical,
legislative, administrative, judiciary and controlling authority”
convened by her First Hierarch in accordance with the Regulations.
“This election is confirmed in accordance with the norms of the
canonical law by the Patriarch of Moscow and All Russia and by the Holy
Synod of the Russian Orthodox Church.”

Moscow, May 17, Interfax – Russia is standing on the threshold of an
historic event – the restoration of the unity of the Russian Orthodox
Church and the Russian Orthodox Church Outside of Russia (ROCOR),
Patriarch Alexy II of Moscow and all Russia said Wednesday evening. 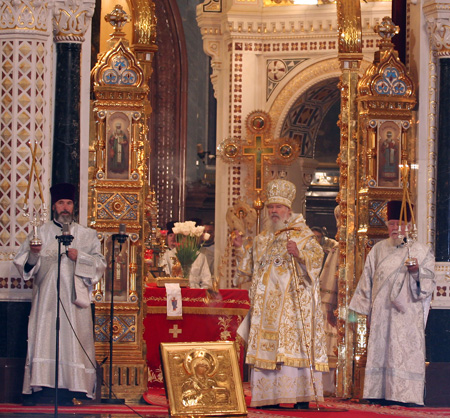 “We are facing a really historic event which we have been looking
forward to for 90 years. The unity of the single Russian Church will be
restored tomorrow with God’s help,” he said addressing parishioners of
the Grand Church of Ascension in Moscow.

He said that it was in that church that on the feast of Ascension an
official delegation of ROCOR led by Metropolitan Laurus prayed together
with him during the Divine Liturgy three years ago.

Russian President Vladimir Putin has described as a
historic event the signing of the Act of Canonical Communion between
the Moscow Patriarchate and the Russian Orthodox Church Outside of
Russia (ROCOR), which took place at the Cathedral of Christ the Savior
in Moscow on Thursday.

“This is a truly national historic event of immense moral
significance,” Putin said speaking at the signing ceremony at the
cathedral.

“The Church was divided as a result of a deep political split in
Russian society itself and bitter confrontation primarily in society,”
Putin said.

“Now, after long decades of separation, it would be safe to say that
nobody has benefited from this ecclesiastical and political conflict,”
he said.

This conflict has caused serious losses both to the church and the
believers, “who had to live in the atmosphere of estrangement and
mutual mistrust for a long time,” Putin said.

“Today’s revival of the Church unity is a crucial precondition for
restoring the unity of the entire Russian world, which has always seen
Orthodoxy as its spiritual foundation,” Putin said.

“In modern Russian society based on democratic principles of open and
free practice of any religion, there is no more ground for a tragedy
and confrontation that have become a matter of the past,” Putin said. 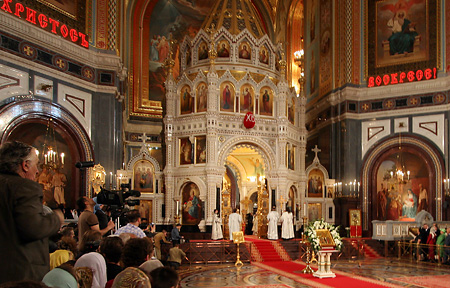 Putin met with Metropolitan Laurus, the first hierarch of ROCOR, during
his visits to New York in 2003 and 2005. Meeting Metropolitan Laurus in
September 2003, Putin handed him a personal invitation from Patriarch
Alexy II of Moscow and All Russia.

In May 2004, Putin received Patriarch Alexy II and Metropolitan Laurus
in the Kremlin and promised that the Russian government “will do all it
can to help in the full revival of the Russian Orthodox Church and its
reunification.”