After the deposition of Morsi, reprisals against Christians 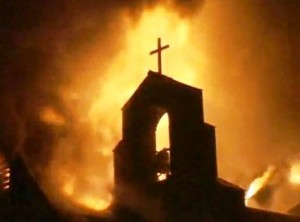 Minya – Among the episodes of violence in Egypt after the overthrow of President Morsi there is also the attack against the Coptic Catholic parish of St. George, in the village of Delgia, 60 kilometers from Minya. Since Wednesday evening, July 3 groups of fanatical Islamists first looted and then burned down the pastor’s house and church group buildings. “Thank God there were no victims and injuries” says to Fides Agency the Coptic Catholic Bishop of Minya Botros Fahim Awad Hanna “but the alarm continues. The fundamentalists have closed the roads at the entrance to the village. They shout slogans against Christians, they say they want to destroy everything and now they are trying again to storm the church. The local police are helpless, I called Cairo to ask for the intervention of the army.”

The attack on the parish of St. George is so far the most serious incident of violence against Christians recorded in the dramatic hours experienced by the Country. But threats and intimidation against Christian communities also occur in other Egyptian places.