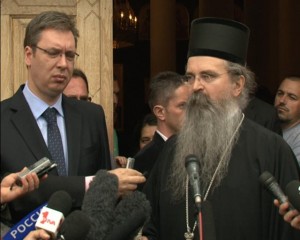 After the meeting, Vučić said that even though they did not share the same opinions, they agreed on coordination and joint actions.

After the meeting, Zvečan Mayor Dragiša Milović confirmed that an agreement on the continuation of cooperation had been reached.

“We do not have a spare state and we have to work together,” he stressed.

He added that a meeting between Vučić and councilors of northern Kosovo municipalities would be an opportunity for the councilors to ask questions and express their doubts and fears regarding the implementation of the Brussels agreement.

Vučić is visiting Kosovo today in order to meet with Kosovo Serbs and reach an agreement on the implementation of the agreement.

“The Brussels agreement is not perfect but it should not be used to scare people,” he said earlier on Sunday.

The deputy PM stressed that the state would stand by its citizens in Kosovo.

Vučić explained that the agreement was the best Serbia could reach at the moment “and Serbia is doing and will do everything in favor of its people”.

“Serbia does stand by its people, it will not leave them and it is looking to the future,” he said after a meeting with Bishop of Raška-Prizren Teodosije.

He underscored that he had come to Kosovo not to make excuses but to talk about the future with local people and the ways the state would stand by them in the future and what should be done.

Vučić noted that it was not written anywhere in the agreement that Kosovo’s Constitution would be respected and added that the Kosovo army would not set a foot in the north of the province.

He said that Kosovo’s laws would be implemented but that Serbia would finance employees in the health and education systems. The deputy PM added that other powers would be taken over by the Community of Serb Municipalities.

“Nobody can see the joy in my eyes because of the Brussels agreement. I have come to tell people here what we need to do in the next period, what our obligations are and I will not try to persuade the people that it is a good document,” Vučić said.

He pointed out that he would not try to deceive the people “like some who say they are bigger patriots than him”.

Teodosije said that the fact that the Serbian government and the Serbian Orthodox Church (SPC) were together in Kosovo on Sunday represented an encouragement and a sign that they were united.

According to him, the Serbian government’s support is important for the survival of Serbs in Kosovo.

Commenting on the Brussels agreement, the bishop said that it was the best it could be reached in given circumstances.

Vučić arrived in Kosovo on Sunday morning was welcomed by numerous citizens in front of Leposavić’s St. Basil of Ostrog Church.

He attended a liturgy served by Teodosije.

After Leposavić, he will travel to Kosovoska Mitrovica where he will meet with councilors of four northern Kosovo municipalities at 16:00 CET.

More than 60 accredited journalists are reporting about Vučić’s visit to Kosovo.

Prime Minister Ivica Dačić and Vučić have recently discussed the Brussels agreement with representatives of northern Kosovo Serbs and heads of districts from southern Kosovo.

Posters saying “Welcome to Serbian Kosovo and Metohija, Vučić” have been put up in the Leposavić municipality.

German KFOR troops have set up a check point on the road.

Ahead of his trip to Kosovo, Vučić said that he wanted to discuss every detail of the agreement with northern Kosovo Serbs and stressed that there would be no repressive measures even if no agreement was reached.