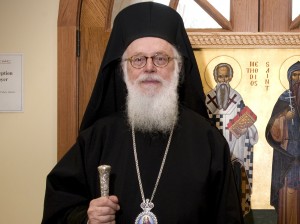 After the publication of the official statement on what critics said was an inaccurate 2011 Census,  Archbishop Anastasios was accused by some Albanians of “unconstitutional acts” and of having worked with extreme nationalist circles of Greece for “anti-Albanian activity against Albania’s territorial integrity”.

The 42 Tirana archdiocese Orthodox clergy released a joint statement in defense of Anastasios Yannoulatos. Their attitude comes after strong reactions against the Red and Black Alliance, in support of Archbishop Anastasios and after a census that claimed a miniscule amount of Orthodox lived in Albania.

It was reported that a death threat was made against the Archbishop and his supporters denounced what they called a a “sick,slanderous attack” against him. They said criticism against him for his assertions the census was false were just a “morbid figment of imagination” and are “completely unfair as they distort the truth”.