All Saints of Russia

If we do not embrace the faith whole-heartedly, with that spiritual hunger and thirsting, as we hear in the Beatitudes, and live it out in our lives, there is no point in celebrating the feast today.
Priest John McCuen | 05 June 2010

Last Sunday, the first Sunday after Pentecost, we celebrated the Feast of All Saints. We asked the question, “What makes a person a saint?” We talked about how saints are consecrated, set apart for the service of God, and no longer focused on worldly purposes. We looked at the icons, and the saints we see there, in our family picture album, and our church “hall of fame.” The conclusion was that they yielded themselves to the Holy Spirit, and so were set apart, consecrated to God – and that each one of us has received the same Holy Spirit, and that we are meant to be temples of the Holy Spirit, to minister to the needs of others and to proclaim the good news of our deliverance from death by our Lord Jesus Christ. We are all saints; and we are all meant to be “Saints,” in the way that we talk about those whom we remember, who we venerate through their icon. 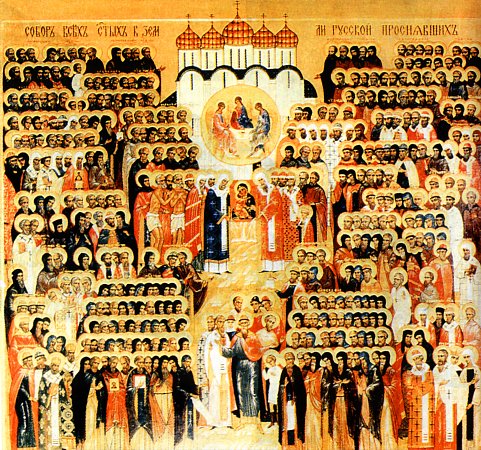 Today we celebrate the Feast of all the saints whose light has shined upon us from the land of Russia, from the time of the baptism of Russia in the year of our Lord 988 through trials and invasions and wars, to those who are among the new martyrs and confessors, some of whom suffered and died during our own lifetimes. It took almost a thousand years for the good news to reach Kievan Rus’; it took another 800 years to make the journey from there across the steppes and the taiga to the western shore of the Pacific Ocean, and then, from the port city of Saints Peter and Paul, to come to Alaska, and down the west coast of the North American continent, in the year 1794. The faith was carried across the Russian land, first by monks, who fled from cities and towns and villages to struggle in the wilderness; and then by others, who formed small sketes, and then monasteries. People began to move nearby, and settlements became villages, and then towns, and then cities; and so monks would again flee further east, into the wilderness, starting the cycle again. Time and again, the Orthodox faith was embraced by the people who heard the Gospel as the roving monks came their way, and so the Church grew, and her influence spread. Many miracles were performed, many people were healed, and many, many more were protected and comforted in troubled times. We could speak for hours on end about the many wondrous saints who lived in Russia, and not discuss them all – to say nothing of those whose names and circumstances are known to God alone, in Whose presence they dwell.

Brothers and sisters, let us pray that God will bless us with grace and strength to learn and follow the examples of saintly living given to us by all the saints of Russia, that we may join them in glorifying God, and to making known to our land, as they did in theirs, the good news of our salvation in Jesus Christ our Lord.

O all you saints of the Russian land, pray to God for us!

The Feast of All Saints of Russia by Fr. Sergei Sveshnikov

All Saints of Russia Sunday by Metropolitan Anthony of Sourozh