An Extraordinary Session of the ROCOR Synod of Bishops is Held 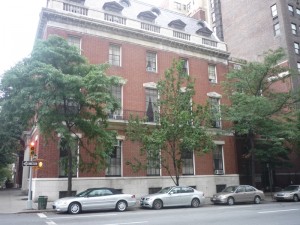 Deliberating on the matter of Bishop Jerome of Manhattan, the Synod of Bishops made a decision as follows:

“During a meeting of the Synod of Bishops on Wednesday, July 10, 2013, presided over by the First Hierarch of the Russian Church Abroad, A DECISION WAS MADE: on the activities of Bishop Jerome of Manhattan, Vicar of the President for the Administration of Western Rite Parishes.

After exhaustive deliberation, IT WAS DECREED:

1) To halt the ordination of new clergymen for parishes adhering to the Western Rite.

2) To censure Bishop Jerome for his willfulness in administering the parishes adhering to the Western Rite, and in performing various ecclesial services not approved by the Synod of Bishops, and for criticizing his brethren in letters to clergy and laity.

3) To deny recognition of the ordination of a group of individuals by Bishop Jerome during a single divine service, and to regularize them following a thorough examination of the candidates.

4) To release Bishop Jerome from all duties, including those of Vicar of the President in administering Western Rite parishes, designating him as retired without the right to serve in the Synodal Cathedral “of the Sign” in New York, or to perform ordinations or award clergymen, and designating his place of residence at St Vladimir Memorial Church of the 1000th Anniversary of the Baptism of Russia in Jackson, NJ.

5) To bless Bishop Jerome to perform divine services within the confines of the Eastern American Diocese with the consent of its Ruling Bishop.

6) To release Monk Anthony (Bondi) from all of his administrative duties and from the spiritual ministry to the Vicariate of Western Rite Parishes.

9) To emphasize our adherence to the rules and traditions of the Eastern Orthodox Catholic Church in general and of the Russian Orthodox Church in particular.

10) To deem this decree immediately valid and to submit it to the members of the Council of Bishops in the form of a questionnaire for confirmation.”

The meeting concluded with the singing of “It is Truly Meet.”