An Orthodox Christian in the NFL

First of all, I’m a Christian so my prayer life really comes first. Second of all, I’m a husband so my wife comes before anything else. If I have time to do anything else after that, I do it, but I don’t sacrifice any time with her.
| 10 January 2009 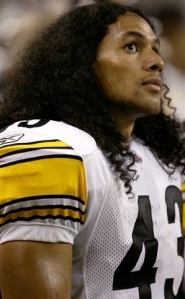 PITTSBURGH – Strong safety Troy Polamalu has become known around the Pittsburgh Steelers as the last guy out of the locker room on Sundays after home games. All of his teammates are long gone and even most of the equipment guys have cleared out by the time he emerges. Polamalu goes through a detailed process, including a dip in a cold tub and a lengthy shower to relax after a hard-hitting afternoon. However, for a guy who doesn’t seem to be in a hurry to leave, Polamalu does put a serious priority on his time away from the field with his wife, Theodora, the sister of Polamalu’s former USC teammate Alex Holmes.Polamalu took some after Sunday’s win over the San Francisco 49ers to engage in a O&A with Yahoo! Sports.

Cole: Do you have a routine you follow on your day off?

Polamalu: We work out together because that’s our only day off together. It’s a pretty decent workout. She does a lot of running and I do a lot of stretching. Tuesday is also our only opportunity to go to church together, so we do that.

Cole: When and where do you go?

Cole: I know you’re devoutly Christian (Polamalu has a carefully arranged series of religious items in his locker at Heinz Field), but exactly which denomination?

Cole: How long are you in services?

Cole: That’s a four-hour service. Is that a normal service?

Polamalu: Pretty much, especially at a monastery.

Cole: Can you describe it?

Polamalu: What’s really neat about the Orthodox church is that it’s like walking back in time 2,000 years to the time of the Apostles, when they created these services. You walk into that and it’s really like … living it. They have maintained the truth ever since the beginning.

Cole: You’re Polynesian. How did you end up at a Greek Orthodox church?

Polamalu: There are different ethnicities, like Russian Orthodox. My wife is Greek. I was a non-denomination Christian before we got married. So we sit around there and meet with our spiritual mother and then we go home, maybe take a nap, work out and then go home and have dinner.

Polamalu: My wife; I cannot cook at all. I’ve tried. I’m terrible. When I cook, it’s something nobody else would enjoy.

Cole: You only cook specialty things for yourself?

Polamalu: No, it’s not that nobody else will make it for me, it’s that I’m the only one who is going to enjoy it. I’ll look at the other people and say, “Did you like it?” They say, “Noooooooo.”

Cole: Do you have any other hobbies or things you do away from the field? Maybe bowling?

Polamalu: No, not really. The single guys go bowl. The guys who are married go home, mostly. I really focus on spending time with my wife.

Cole: How hard is it to get time at home during the season? I know guys like (Miami Dolphins linebacker) Zach Thomas stay at the facility until very late studying film and (Indianapolis Colts quarterback) Peyton Manning is watching film at home.

Polamalu: First of all, I’m a Christian so my prayer life really comes first. Second of all, I’m a husband so my wife comes before anything else. If I have time to do anything else after that, I do it, but I don’t sacrifice any time with her.

Cole: A lot of guys do it the other way around. Football comes first. They say family and faith come first, but they really do the football first. How do you reconcile it?

Polamalu: It’s really easy for me. I love my faith and I know that’s first. …. I really think I know what’s important in my life and that’s my faith and my wife.

Cole: So football is a really focused activity. There’s no wasted time, right?

Polamalu: Actually, it’s a lot of fun and it’s something I enjoy. It’s not like when I’m here it’s business time and then there’s family time. Football is, for me, it’s something I do. It’s like for you, you’re a reporter. It’s what you do, not who you are. Football does not define me. How I am with my faith and how I treat my wife is what truly defines you as a man. That is my goal in life to live that way and believe in it. It would be cowardly of me to say that I enjoy my time with my faith and my wife if I really didn’t spend that time with them.

Cole: How long have you been married?

Polamalu: God willing, someday. But three dogs counts for one kid, I think.

Polamalu: Come on, it has to count for one kid.

Cole: I respect and admire your beliefs and your stands on many things, but I’m not buying the three dogs-to-one kid ratio.

Polamalu: OK, you win this one.

Cole: Wait till you have a child waking up at 3 a.m., hungry and then he’s got colic and he’s screaming and you have no idea why.

Polamalu: (laughing) Yeah, it’s probably like, “Talk to me, tell me what’s wrong. Oh, that’s right, you can’t talk to me.” Yeah, with the dogs it’s if they pee in the house you say, “Go to the kennel.”

Jason Cole is a national NFL writer for Yahoo! Sports.

Metropolitan Hilarion Said Kuraev Could Be Excommunicated from the Church

Metropolitan Hilarion, Chairman of the Department for External Church Relations of the Moscow Patriarchate, encouraged Protodeacon Andrei Kuraev to repent…