An Orthodox View on Child Abuse

Even more widespread in our society is the emotional abandonment of our children. Children are not "wanted", they are a "burden," it is not "fashionable" to have children. The neo-paganism of our times repeats the attitudes of the enemies of the child of every age.
| 08 October 2008 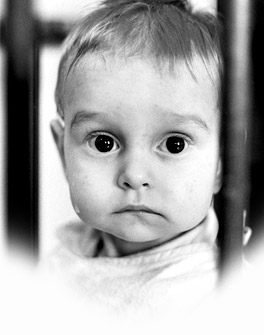 Child abuse is generally understood in our day in broad terms, including the physical, mental, and spiritual harassment of children. It is often understood as inflicting physical harm on children such as striking, punching, whipping, depriving them of physical needs, or subjecting them to sexual perversity. Also, included in the understanding of child abuse is the psychological and emotional harm caused by excessive criticism, denigration, constant verbal maltreatment, psychological abandonment, or hatred.

None of these evils, however, is new or unknown in history. In the period when Christianity first began to spread throughout society, the place of children oftentimes was very precarious. Fathers had, in Roman Law, the right of life and death over their children. Abortion, infanticide, and the exposure of new born infants was a common practice. Young children who were exposed were frequently rescued by those who would use them for immoral purposes, such as pornography, homosexuality and prostitution. Christianity reacted strongly to these attacks against children and developed a widely-based and coherent moral teaching and practice reacting to wide-spread child abuse.

At the heart of Christian teaching and moral values concerning child abuse is the whole Orthodox Christian understanding of marriage and family. One of the essential purposes of marriage is procreation. Spouses become parents not only in a physical way, but also spiritual, since Orthodox Christianity understands procreation as the cooperation of husband and wife with God for the continuation of the human race not only in a physical sense but also morally and spiritually. For the Church, children are a gift from God who complete and fulfill the communion of husband and wife, in the image of the community of Divine Persons which is the Holy Trinity. Ethically, children are required to obey and respect their parents (Exodus 20:12) and parents assume the responsibility for the physical, moral and spiritual nurture of their children. The love of parents for their children is assumed by the teaching of the Church as natural and proper. It expresses itself in affection for children and concern for their welfare. Jesus asked, “If a son shall ask bread of any of you that is a father, will he give him a stone?”, assuming the good will and intentions of the parent. The Church expects as well that parents will guide, direct, and discipline their children, including appropriate punishment when necessary. For, not to discipline offspring is to treat them “as illegitimate children, not as sons” (Hebrews 12:5-11). But discipline and punishment for the sake of correction must be motivated by love and genuine concern for the child, so the teaching of the Church also places limits: “Fathers, do not provoke your children to anger,” (Ephesians 6:4) “lest they become discouraged” (Colossians 3:21). The major task of parents is to direct their children in the paths of the Lord, that they may know Him and in Christian faith, obedience, and Sacramental life, grow in the image of God toward Theosis. In addition, parents are obligated to educate and train their children to be good and useful members of society, to earn their living, so as to contribute to the general welfare and assist the poor and to develop a consciousness of service to humanity, as well as to prepare them in turn to become husbands, wives, and parents in the future.

With this background, it becomes evident why, very early in its history, the Church sought to protect children from abuses of all kinds. Many of those early concerns are still pertinent today, and unfortunately, some new concerns have been added. The war against the child begins with abortion. What the Apologist Aristides said in the Second Century continues to be true today: “It is not permitted to destroy the fetus while it is still in the womb. To prevent birth is to be beforehand with murder; and it makes no difference whether one kills a life already born, or suppresses it at birth. He is already a man who is about to be one; and every fruit already lives in its seed.” (Apology IX, 6) Orthodox Christians will oppose abortion in principle and practice and will struggle to change the immoral legalization of abortion as a legalization of murder.

Though exposure of children in a physical sense does not happen too often in our society, it still occurs elsewhere throughout the world. It should also be noted that moral, emotional and psychological abandonment is becoming more wide-spread. Morally, the ancient practice led to the sexual abuse of children. Justin Martyr, writing about the year 155, noted that Christians “hold it a crime to expose newborn infants because we see that almost all of them are dragged into prostitution, not only the girls, but also boys people raise adolescents for the sole purpose of abusing them obscenely” (1st Apology XXVII, 1). An alarming increase of child pornography, child prostitution and child homosexuality is now being reported in the press, and the Church must oppose it. Even more widespread in our society is the emotional abandonment of our children. Children are not “wanted”, they are a “burden,” it is not “fashionable” to have children. The neo-paganism of our times repeats the attitudes of the enemies of the child of every age. A pagan work called The Satyricon advised that one ought not to have children, for whoever does have any won’t receive party invitations and won’t be esteemed. In imitation, our day speaks of “mere motherhood” and denigrates parenthood, which the Church sees as cooperation with God. How can these be reconciled? Orthodox Christians in precept, word and deed will affirm both parenthood and childhood.

Another concern unique to our time is that children are isolated from the rest of the social fabric with their own music, styles, values, heroes, etc. Among the chief culprits in this “abandonment” is television. Many parents today use TV to “baby sit” their children. But it has taken over the family. The Greek Orthodox Archdiocese Department of Religious Education pamphlet on TV refers to “the way the TV subtly gets control of our lives TV casts out the natural experiences of the family, the daily give and take, the conversations and the personal sharing It reshapes family life. It influences the raising and growth of children. It shapes and molds people’s attitudes and world view almost without their realizing it.” (Television in the Christian Home, p.5).

This psychological abandonment of our children allows all sorts of un-Christian values to enter the hearts and minds of our children, something no Christian parent may properly do, for it is the responsibility of parents to nurture, educate, and guide their child in the ways of faith, moral values and spiritual life. A Christian writing from the earliest period of the Church instructs Christian parents “Do not neglect your son or daughter; but teach them from childhood the fear of God.” (Didache IV, 9). It is abuse of our children to permit the secular society to imbue them with materialistic, secularist and immoral values, denying to them the “waters of life” (Revelation 21:6) which come from God, for we deny to them in fact their “true light and life” (John 1:4; 11:25, 20:31). What greater abuse can there be! We must support all efforts of the Church, movements in society and civil efforts to provide a spiritually and morally wholesome environment for our children and wage a vigorous struggle against all that pollutes and distorts their lives, whatever form it may take.

One of the greatest abuses of children is the diabolical spread of drugs. Young people are systematically introduced to various drugs and made psychologically and physically dependent upon them. This fearsome addiction attacks their whole being, destroying their moral freedom and spiritual growth. If abuse of alcohol is condemned by the Church (Romans 13:13, Galatians 5:21), how much more so does the Orthodox Church oppose involvement with illicit drugs?

It remains to be noted that the Orthodox Church utterly condemns those who physically do bodily harm to children. Children are to be treated with love, concern, patience and understanding. The tenderness of Jesus toward children is the source of our opposition to child abuse. “And He took a child, and put him in the midst of them; and taking him in his arms, he said to them, ‘Whoever receives one such child in my name, receives me; and whoever receives me, receives not me, but him who sent me’.” (Mark 9:36-37) Thus, the remarkable conclusion: to treat a child with love is to show love for God. But the opposite is fearsome: to abuse a child is to abuse God!

Until his retirement, Fr. Stanley Samuel Harakas was the Archbishop Iakovos Professor of Orthodox Theology at Holy Cross Greek Orthodox School of Theology in Brookline, Massachusetts. He is the author of many books. The above extract is reprinted fromContemporary Moral Issues Facing the Orthodox Christian; Light & Life Books; Minneapolis, Minnesota; pp 112-117.