An underground church in Australia

About 800 kilometers north from Adelaide, in the state of South Australia, there is a unique monument, not only of Serbian but also of world culture and architecture. It is the church of Prophet Elijah, completely situated underground.

The Serbs who migrated to Coober Pedy, had a need for a spiritual, religious life. Our miners who were digging semi-precious stones, opal, dug one of the most beautiful pearls not only of the Serbian Orthodox, but also of  the overall Christian culture. Since it is a desert area where temperatures reach above 40 degrees Celsius, our people found an unique and ingenious solution. They built a church underground, at the depth of 9 meters, 30 meters long. They have now a church, a church hall, a parish house and a church school – everything underground. 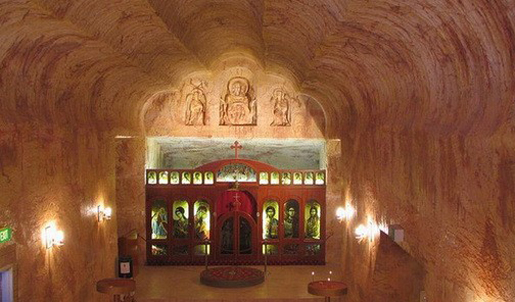 This church has unique frescoes, since they are cut in the rocks, not painted. Following the Romanian example, the iconostasis was painted on the glass behind which lights shine.

His Grace Bishop Irinej of Australia-New Zealand, in his statement to RTS, pointed out particularity of this church: “The Serbian Orthodox Church possesses the most unique Serbian church in the world – in Coober Pedy in South Australia… This is a most unique case because the church is literally underground.”

The Church of Saint Elijah the Prophet celebrated its 20th anniversary this year. The RTS correspondent from Australia Dragan Caran has announced a documentary on this unique cultural monument.