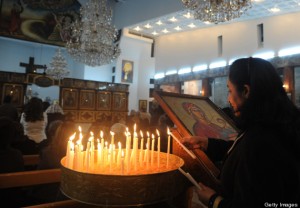 A Christian man was beheaded by Syrian rebels and fed to dogs, a nun has told a British newspaper.

As a consequence, Andrei, who was set to become a father for the the first time, was kidnapped. The 38-year-old’s remains were found in the northern town of Ras al-Ayn, on the Turkish border.

Sister de la Croix, who is mother superior of the Monastery of St James the Mutilated between Damascus and Homs, said: “They beheaded him, cut him into pieces and fed him to the dogs.

“The uprising has been hijacked by Islamist mercenaries who are more interested in fighting a holy war than in changing the government.

“It’s turned into a sectarian conflict. One in which Christians are paying a high price.”

Her comments come as a new report claims Christianity faces being wiped out of the “biblical heartlands” of the Middle East, The Telegraph says.

According to the report – entitled Christianophobia – the most common threat to Christians abroad is militant Islam.

It adds oppression in Muslim countries is often ignored because of fears criticism will be interpreted as racism.

Sister de la Croix, a 60-year-old Carmelite nun who fled Syria earlier this year, condemned the “free and democratic world” for supporting extremists who want to “impose Sharia Law and create an Islamist state in Syria”.

One such group is Islamist militias Jabhat al-Nusra, which has been designated a terrorist organisation by the US.

According to Time Magazine, the group has apparently claimed responsibility for “nearly 600 terrorist attacks, killing and wounding hundreds of Syrians.”

It adds: “It has become one of the most effective fighting forces against President Bashar Assad, undertaking some of the most audacious attacks agains the regime.”

Al Arabiya points out Western support has so far been limited to “non-lethal military equipment” and that Western powers are “until now hesitant on whether to supply the opposition fighters with weapons.”

In August, the Human Rights Watch accused the Free Syria Army of committing potential war crimes as videos emerged of rebels “executing” supporters of President Assad in the city of Aleppo.

HRW’s Middle East deputy director Nadim Houry said the executions could be viewed as a war crime: “Intentionally killing anyone, even a shabiha [a member of Assad’s armed gangs], once he is outside of combat is a war crime, regardless of how horrible the person may have been.

“As the opposition gains more territory, it is important to hold them to the same standard that we would apply to all sides.”

More than 45,000 people have been killed in Syria since the outbreak in March 2011 of an anti-regime revolt that became a bloody insurgency after a brutal crackdown on dissent.