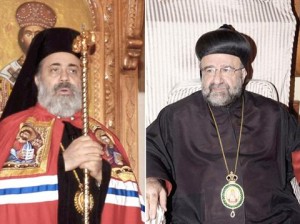 BEIRUT: The Turkish Foreign Ministry denied reports that two bishops kidnapped in Syria were being held in Turkish territories, according to a statement issued Wednesday.

Referring to earlier reports circulated on Aug. 12 alleging the bishops were in Turkey, the statement blamed the Syrian government for spreading false information.

“It has been observed that similar allegations are now being repeated by Syrian officials, in the context of their contacts with the Russian Federation,” the statement said. “These accusations are completely baseless and untrue.”

Aleppo’s Greek Orthodox Archbishop Paul Yazigi and Syriac Orthodox Archbishop Yohanna Ibrahim were abducted in April by armed men while en route to the northern Syrian city from the Turkish border. They were reportedly on their way to negotiate the release of three priests who are also missing.

Reacting to reports that the kidnappers had been identified and provided evidence that at least one of the two bishops was alive, Lebanese Bishop Boulos Sayyah reiterated that there had been no indication pointing to their imminent release.

“There are no negotiations. If there were negotiations there would have been the beginnings of a resolution,” Sayyah told The Daily Star. “This is what is worrying, that there is nothing.”

Sayyah added that so far it was not known whether the bishops were alive or who kidnapped them.

“The emir of Qatar promised us explicitly to do his utmost to try and find who kidnapped them, where they are and what their situation is, and if they have demands,” Sayyah said, adding that the Qataris had not yet followed up on their vows.

Sayyah also said that the Greek and Syrian Orthodox churches are following up on the issue. “What we find difficult to understand is that they [the bishops] have been kidnapped by one or more factions fighting the [Syrian] government. Somebody must be feeding these people money, arms and support of all sorts. We don’t understand how the states that are arming these people cannot step in and [pressure] them [to release the bishops].”