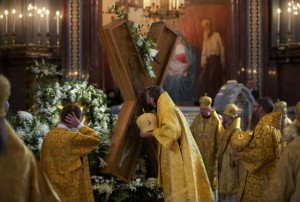 A liturgy at Christ the Savior Cathedral in Moscow on Wednesday will open a series of commemorative events to mark the 1025th anniversary of the Baptism of Rus celebrated jointly this year in Russia, Ukraine and Belarus.

Russian Orthodox leader Patriarch Kirill will hold the service assisted by the Primates of other Orthodox Churches who arrived in Moscow to participate celebrations beginning with Wednesday’s feast of  Olga, Ria Novosti reported.

A concert will be held on Red Square Thursday, also the last day when the Cross of  Andrew, considered the father of the Church in Eastern Europe, is exhibited in Russia.

The relic arrived in St. Petersburg on July 11, from the Greek city of Patras, and will take a specialized train to Kiev with a delegation of Orthodox leaders on Friday.

In Moscow, the authorities expect at least 400,000 pilgrims to arrive to Moscow’s Christ the Savior Cathedral, where it is currently on display.

The culmination of the festivities will be held on July 28 in Kiev where a prayer service will be held at St.Vladimir’s Hill to mark the day of St. Vladimir, the Baptist of Slavs.

In 2010, the Russian Duma passed a law creating a holiday on July 28. The day marks Prince Vladimir’s baptism of the inhabitants of Kiev in 988 and the foundation of Christianity in Russian lands.