Source: Christ the Savior Orthodox Church
The primary message is that though our God is powerful and wise enough to do all things necessary for our salvation, He will not force Himself upon us for He is meek and lowly of heart. God has created us in His image and likeness as free beings, each able to determine his or her own destiny, each able to accept or reject His invitation to the heavenly kingdom, and each able to chose whether or not he or she wants to participate in his or her own redemption and salvation.
Priest John Parsells | 06 April 2009

In the Name of the Father and of the Son and of the Holy Spirit. Amen.

On the Fifth Sunday of the Great Fast, the Church calls to remembrance the Life of St. Mary of Egypt, a woman who experienced like few others the two poles of the spiritual life, a woman who knew from first hand experience the depth to which man can fall through sin and the height to which man can rise in Christ through repentance.

On this day we recall that great of event of the Annunciation of the Archangel Gabriel to the Virgin Mary, in which he tells her of God’s will to become man, to make His abode within her womb by the overshadowing grace of the Holy Spirit. And we sing in the Troparion of the feast, “Today is the beginning of our salvation, the revelation of the eternal mystery, the Son of God becomes the Son of the Virgin, as Gabriel announces the coming of Grace!”

In this dialogue between the Archangel Gabriel and the Virgin Mary, we see much more than a mere conversation between an angel and one of the Hebrews – rather, we see what is perhaps, the most important dialogue in all of salvation history, what is perhaps, the most important conversation between God and mankind, the Archangel Gabriel being God’s messenger and the Virgin Mary being as the one, as Scriptures say, who is both highly favored by God and called blessed by all generations of men.

Now what is so special about this conversation? Just that without it, our salvation would not have come to pass: the Son of God, the One who was to be called “Jesus” because He would save His people from their sins, would not have been born, and would not have been able to accomplish as a man our victory over sin, death, and the devil; and we would all therefore still be dead in our sins. 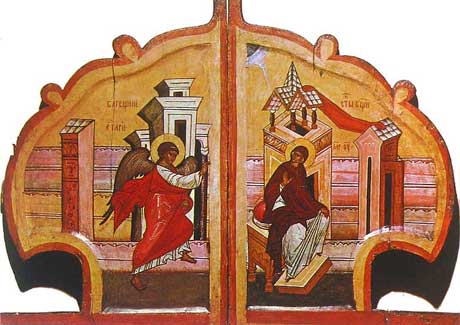 Whereas of old that dialogue between the devil and Eve had disastrous consequences for the human race, here the dialogue between the Archangel Gabriel and the New Eve, the Virgin Mary, had tremendously positive consequences for all of mankind; for this dialogue led not to sin, corruption and death, but to the birth of the One Who would destroy such things. This dialogue did not lead to man’s expulsion from Paradise, but rather to his entrance into the Kingdom of Heaven.

Whereas in Paradise, we see the pride of man, who sought to become God without the Lord’s cooperation, in Nazareth, we see the humility of God, Who sought to become man but only by first asking the cooperation of the Holy Virgin. Where of old the Fall was preceded by man’s pride and defiance, in the Annunciation, restoration is preceded by God’s humility and meekness.

Whereas in Paradise, God used Adam in the creation of Eve, causing a deep sleep to come upon him so that He could form Eve from his rib. In Nazareth, God asks the New Eve, the Virgin Mary, to participate in the welcoming of the New Adam, Jesus Christ, asking her to offer not a rib but her own flesh and asking her to accept not a deep sleep but the overshadowing of the Holy Spirit.

And so, today we celebrate the beginning of a new creation, the flowering of a new garden, not in Eden but in the city of Nazareth, a city whose name bears witness to its high calling for Nazareth means the city of a new sprout or a new shoot.

This new sprout is of course, Jesus Christ, the One who would later call Himself the True Vine, Whose heavenly Father is the Vinedresser, Whose earthly Mother is the root from which He sprang into this world, and Whose branches are all those who would later be grafted into His life, bringing forth the fruits of His Holy Spirit.

Now while the imagery is striking and very beautiful and the events of this day, miraculous and very wonderful, we mustn’t lose sight of the primary message of today’s events.

The primary message is that though our God is powerful and wise enough to do all things necessary for our salvation, He will not force Himself upon us for He is meek and lowly of heart. God has created us in His image and likeness as free beings, each able to determine his or her own destiny, each able to accept or reject His invitation to the heavenly kingdom, and each able to chose whether or not he or she wants to participate in his or her own redemption and salvation.

The Lord does not force us to pray, to study His word, or to walk in His commandments; He does not force us to repent and receive forgiveness of sins in Confession, to turn to Him for the healing of soul and body in Holy Unction, or even to draw near to Him and receive His most precious Body and Blood with fear, faith, and love in Holy Communion. All of these things the Lord wills for us because He knows that through them we can be saved, through them we can overcome the temptations of our lives and we can walk with Him in newness of life, through them we can be incorporated into His victory over sin, death, and the devil.

But brothers and sisters, all these things are offered as an invitation, an invitation which we can either accept, reject, or choose to ignore.

Two thousand years ago, the Virgin humbly accepted the Lord’s will with the words, “Let it be to me according to your word.” This simple response, allowed the Lord, Who once walked with Adam and Eve in the coolness of Paradise, to once again walk among us His beloved people, this time not simply as their Creator, but now also as their Redeemer, as the One Who would accomplish all things necessary for their salvation.

And through our own personal response to God’s invitation to walk with Him each day in newness of life, He will likewise accomplish all things necessary for our own salvation. All we have to do is accept the invitation to follow Him, as His disciples, as His co-travelers, as His friends, and even as His brothers and sisters for through adoption by grace we have become sons and daughters of His heavenly Father.

Let each of us today, and everyday, listen to the humble voice of the Lord and accept His invitation. The Lord wills to do great and marvelous things for us, let us do our part, and welcome Him into our minds, hearts, and lives, so that we might walk with Him as new creatures of God, new men and women in Christ, as the first fruits of a redeemed and sanctified creation.

Through the prayers of our Most Blessed Lady Theotokos and Ever-Virgin Mary, O Lord Jesus Christ, Son of God, have mercy upon us and save us. Amen. 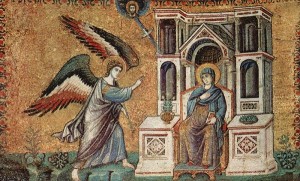 This is the very key to the Fast: to make the transition from outer stillness to inner stillness,…