Another massive rally in Paris against same-sex marriage 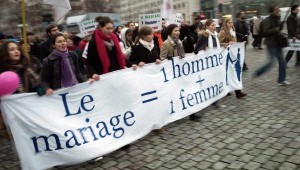 Hundreds of thousands of French citizens rallied in Paris on Sunday, March 24, to protest a government plan for recognition of same-sex marriage.

Legislation allowing for homosexual unions passed easily in the lower house of parliament, supporters of the measure are confident of approval in the Senate, and the bill has strong support from President Francois Hollande. But defenders of traditional marriage, hoping to generate strong public resistance, organized the second massive demonstration for their cause.

Police estimated the crowd in Paris at 300,000. Organizers dismissed that estimate as wildly inaccurate, saying that well over 1 million people had participated.

The demonstration was peaceful until some participants tried to turn onto the Champs Elysée to approach the presidential palace, and clashed with police blocking that route. The police used tear gas to disperse the crowd, prompting protests from many bystanders who had not been involved in the confrontation with police, but were affected by the tear gas. Thousands of families, many including young children, had been involved in the rally.