On Tuesday, November 12, His Grace Bishop Nicholas of Brooklyn, and Antiochian Archdiocese Vicar-General Archpriest Thomas Zain, visited His Eminence, Archbishop Justinian, Archbishop of Naro-Forminsk and Administrator of the Patriarchal parishes of the Russian Orthodox Church in the USA. 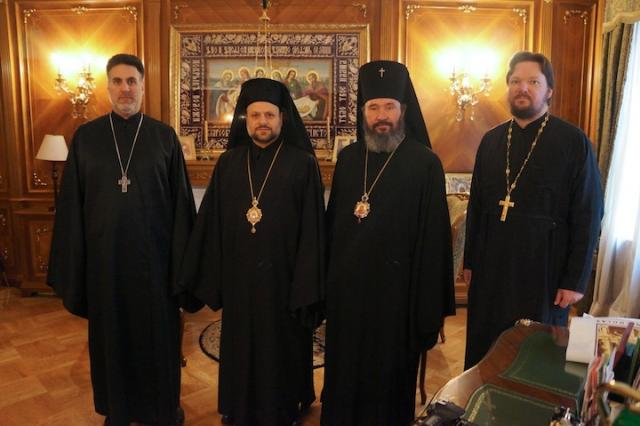 The purpose of the visit was to present Archbishop Justinian with a letter and substantial monetary donation from His Eminence Metropolitan Philip on behalf of the clergy and laity of the Antiochian Archdiocese for St. Nicholas Russian Orthodox Cathedral, which had been damaged by fire the evening of October 4, 2013. While the church proper was not damaged, the electrical fire caused severe damage and destruction to the basement area that houses the refectory and offices.  Archpriest Georgy Roschin was also present at the meeting and served as the translator.

The two bishops discussed many topics of interest in the Orthodox world and especially regarding the situation of Christians in the Middle East and the ongoing war in Syria. Bishop Nicholas expressed his thankfulness for all that the Russian Orthodox Church and the country of Russia is doing to protect and provide for the Christians and all the people of Syria. After relaying his gratitude to Metropolitan Philip on behalf of the rector and parishioners of the Cathedral, Archbishop Justinian presented Bishop Nicholas with an engolpion (panagia), and presented Fr. Thomas with a beautiful candle holder.

Most viewed articles
Metropolitan Hilarion of Eastern America and New York to Be Buried in Jordanville on May 22220
Patriarch Kirill: The Peoples of Russia and Ukraine Have No Interest in the Conflict185
Communion restored between the Serbian Orthodox Church and the Macedonian Orthodox Church – Ohrid Archbishopric133
Metropolitan Hilarion of Eastern America and New York Reposes in the Lord129
What Do We Celebrate at Mid-Pentecost?110
Family Life and Spiritual Warfare74
Celebrating 100 Years with Paschal Joy71
Patriarch of Serbia to Concelebrate with Archbishop Stephen of Ohrid50
Concelebration of Divine Liturgy by the Serbian Patriarch and Archbishop of Ohrid in Belgrade (VIDEO)44
China’s Internet Clampdown Is Step Closer to ‘Cancelling Christianity’40
Most popular authors
Pravmir.com team761
Ioannis Foundoulis110
Archpriest Michael Gillis74
Priest Luke A. Veronis71
Donna Birrell40