Archbishop Chrysostomos II of Cyprus: Rich is he who has Christ in his heart 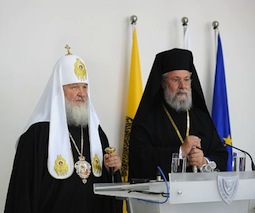 The celebrations marking the 1025th anniversary of the Baptism of Rus’ in Russia, Ukraine and Belarus were over in the end of July. Among the witnesses to and participants in the celebrations was His Beatitude Chrysostomos II, Archbishop of New Justiniana and All Cyprus. His interview has been published by the prichod.ru portal.

-Your Beatitude, what are your impressions of the celebrations devoted to the 1025th anniversary of the Baptism of Rus’?

-For us the invitation from His Holiness Patriarch of Moscow and All Russia to visit Russia and take part in so significant a celebration was a great joy. The fact that the celebrations to mark the 1025th anniversary of the Baptism of Rus’ were attended by Primates and representatives of all the Orthodox Churches of the world testifies to the unity of Orthodoxy. In spite of the fact that there are many Orthodox Churches, the Church itself is one. And the fact that we as representatives of various Local Churches arrived in Moscow and then in Kiev and Minsk for the celebrations also proves it and gives a strong and resounding message to the whole world.

Christianity is a faith of love; it gives a meaning to human life; it tells man what he should live for. He who has Christ in his heart has everything and needs nothing. Despite his seeming poverty, he is rich with having Christ; despite his seeming misfortunes, he is still happy. He who has Christ in his heart is enlightened. In his heart, he has both light and love. This light comes from the heart and enlightens the neighbour.

During the celebrations, I had an opportunity to see thousands of the faithful who came for the liturgy to pray together with the Patriarchs, to take communion and to become united with one another and with Christ. Together with other Primates of Churches, I could see how Moscow and Kiev have changed in the recent time because I had the good fortune to take part in the celebrations on the occasion of the Millennium of the Baptism of Rus’ back in 1988. I can say I have seen many considerable changes for the better.

-What role, in your view, does Russia play in today’s world? What can she offer to the world community?

–Russia as a large and strong country can offer very much to the world today. Unfortunately, the powerful of this world have increasingly pursued their own political and economic interest; they do not seek justice and follow it. But Russia as a strong state in which there are a great many believers, together with Russian Orthodoxy, should base her policy on such values and ideals as love and justice. During the meeting between participants in the celebrations and Russian President Vladimir Putin, I told the head of the Russian state that present at that meeting was the fullness of Orthodoxy; we called him to give support to the Middle East so that Christians who live there might not have to leave their homes and native lands. If extremists take over in Muslim countries, there will be no religious minorities in them or even Christian presence.

I am confident that such a strong state as Russia can offer much to the world. She can prevent oppression of the poor in the world and can herself help in the search for just solutions of the problems of today’s world. Only well-off people can afford leaving the territory of the Middle East. And what the poor and those who cannot do so are to do? In this sense, strong Orthodox states can offer their help and protect these people.

All the Orthodox states should defend truth and justice so that love may prevail in the world. Let us remember that God is love (1 Jn. 4:8). Therefore, it is necessary to restore God’s reign in this region.

-What concrete help do you mean? In addition to support in prayer, what else can be done to save Christians in the Middle East?

-In Orthodox countries, there are Orthodox presidents and prime minister. They all can make an influence on the making of particular decisions, including political ones. And if most of the faithful influence their authorities, then politicians will listen to their opinion.

Power is dependent on the people since there are elections every few years. Therefore, ordinary people should call politicians to peace and love, and politicians should listen to the voice of believers and make appropriate decisions.