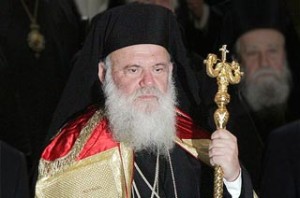 Archbishop Ieronymos of Athens and All Greece

Holy Cross Greek Orthodox School of Theology will confer an Honorary Doctorate Degree to His Beatitude Archbishop Ieronymos II of Athens and All Greece, during its 2013 graduation ceremony, Saturday May 18.

The day before, May 17, His Beatitude will officiate at Vespers in the School’s Chapel of Holy Cross. That evening the Theological School will host a dinner in his honor.

On Sunday morning, May 19, an Archieratical concelebration of the Divine Liturgy will take place at the Archdiocesan Cathedral of the Holy Trinity in New York. Later in the evening, a special concert by the Archdiocesan Byzantine Choir and the Archdiocesan Youth Choir will be offered to honor Archbishop Ieronymos.

On Monday, May 20, Archbishop Ieronymos will visit the headquarters of the Greek Orthodox Archdiocese of America and the Greek American School of St. Demetrios in Astoria, NY.

More details on the program of His Beatitude Archbishop Ieronymos’ visit in Boston and New York will be forthcoming.