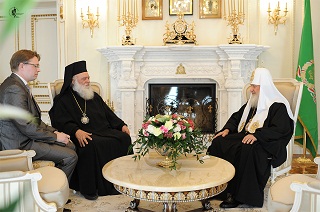 His Beatitude Ieronymos, Archbishop of Athens and All Greece, has sent to His Holiness Patriarch Kirill of Moscow and Russia a letter expressing gratitude for the financial assistance given by the Russian Orthodox Church for the implementation of the Greek Church’s charity projects.

‘In your person we once again thank the pious clergy and people of your Russian Church for the generous aid given with the readiness that speaks of your great love and shows that spiritual and fraternal bonds have long existed between our Holy Churches’, the letter states.

Archbishop Ieronymos informed Patriarch Kirill that the funds raised by the Russian Orthodox Church were divided between 81 metropolises of the Church of Greece and the Archdiocese of Athens in proportion to their sizes. The funds, he said, were used to support programs for free soup-kitchens and charity projects for aid to victims of the economic crisis.

His Beatitude also stressed that the central economic service of the Church of Greece guaranteed that it would give a detailed and transparent account of all the expenditures.

The fund-raising campaign in aid to the people in Greece who were most affected by the economic crisis in Greece was organized in January 2012 in Russian Orthodox churches and monasteries with the blessing of His Holiness Patriarch Kirill of Moscow and All Russia.

Most viewed articles
An Extraordinary Session of the ROCOR Synod of Bishops Convenes138
How to Get Rid of Spiritual Infantilism?103
How to Respond to Opposition to the Gospel100
A Piece of Rock Falls Down on the Skete of St. Anna on Mt. Athos84
His Beatitude Metropolitan Tikhon Issues Statement on Tragic School Shooting in Texas60
PRAY: 14 Students, One Teacher Dead After Texas Elementary School Shooting42
Romanian priests in Madrid draw conclusions on the benefit of praying together with family members41
Three Words32
test1
Most popular authors
Pravmir.com team222
Priest Andrei Chizhenko103
Archpriest Basil Ross Aden100
Metropolitan Tikhon of All America and Canada60
Associated Press42
Aurelian Iftimiu41
Archpriest Geoffrey Korz32
Maria Trushanina1