Archbishop Kyrill of San Francisco and Western America: We must not hide our holy faith 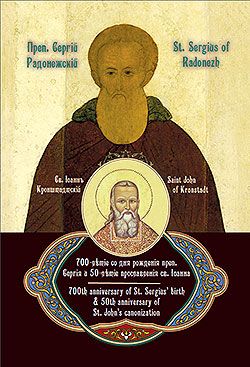 Dear in the Lord fathers and concelebrants, brothers, sisters, and children
– good and faithful servants of the Western American Diocese!

The lives of these saints are very similar, in spite of the fact that one lived in the 14th century, and the other six hundred years later, one in the silence of the forest, the other in the bustle of the city, one in the monastic vocation, the other – a representative of the parish clergy. Their influence – not only on Russian spirituality and on the life of the Russian Orthodox Church, but on the history of their Fatherland – is definitive. 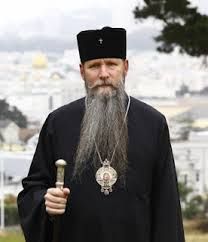 Both of these saints were from the people, and from their youth were fed with spiritual food. Their parents put the Lord God first in their lives, strictly observing the rules and traditions of the Church. An atmosphere of piety and simplicity ruled in their homes. Thanks to this, both of these saints loved God with simple and complete love, and throughout their lives, they remained simple and accessible.

Studies were difficult for the youth Bartholomew (the future St. Sergius) and the child John (the future saint of Kronstadt), and both received the gift of knowledge miraculously: Bartholomew through a particle of prosphora, given to him by a certain elder, and John, after “the veil was taken from his eyes” during his fervent evening prayer, became able to remember lessons.

Their love for Christ and His Church knew no bounds. Never was any criticism of the Holy Church heard from their lips, though there were certainly opportunities. They did not try to change the world, but rather sought to change themselves. God glorified both of them quietly, in different times. They did not seek to be teachers, but people flocked to them to be taught; they did not seek power over people, but were sought out as leaders. Fleeing all worldly glory, they became famous throughout Russia, and later the whole Christian world.

Sts. Sergius and John both loved their Fatherland, and loved the pious Russian people. St. Sergius lived in the Time of Troubles, a time of civil wars among princes and of the Tatar yoke, and St. John in the time of free-thinking, blasphemy, apathy, and turning away from the ways of the Church. The “Abbot of the Russian Land” changed the world through his prayers, labors, example, and meekness. By his prayers the victory was obtained over the Tatars, the people came together and found hope and meaning in their lives. He and his disciples founded dozens of monasteries. To this day, the Trinity cathedral of the Trinity-Sergius Lavra, where his relics are kept, is the heart of Russia.

“The Pastor of All Russia” John fiercely upbraided the sins of man, like the prophets Elias and John the Baptist, fearlessly speaking the truth directly. At the same time, he was a self-denying and compassionate pastor to his flock. In the words of St. John (Maximovitch): “ Towards the end of his life [St. John of Kronstadt] became a prophet, foreseeing the future trials [in Russia], if repentance and correction of life did not begin”. One of his greatest accomplishments was the rebirth of the ancient tradition of frequent communion of the Holy Mysteries of Christ.

Both of these saints have become symbols of Orthodoxy for us, Russian Orthodoxy. For us, the children of the Russian Orthodox Church Outside Russia, these symbols are close to our hearts and dear to us and thus we are celebrating these two anniversaries together with the fulness of the Russian Church. But Sts. Sergius and John are not only symbols: they are alive to this very day. Even today they interact with all people that honor them and appeal to them. Even today they are with their beloved Russian flock and all the children of the Russian Church in all parts of the world. St. John of Kronstadt constantly repeated that in God, we all constitute a whole: the angels, the saints, and Christians working out their salvation, both the living and the dead.

The world in which we live is in many ways similar to the worlds of the 14th and 20th centuries, in which Sts. Sergius and John lived: again we live amidst enmity and bloody conflicts. Our world is also being torn apart by human sin and various vices, as well as apathy towards God’s commandments.

What do St. Sergius, and his spiritual heir, St. John of Kronstadt, have to teach us? We must have a spirit of humility, a heart full of contrition over our sins, and true spiritual life; true prayer, and not only wishes and requests! We have to be bearers of the spirit of joyous transformation in God. We must learn to trust the Church of Christ and learn from the Church herself: from her teachings and traditions, from her divine services, and from the word of God.

We must not hide our holy faith! Each one of us must protect their soul amidst the storm of evil and passions which rise up against the truth.

I congratulate you, dear ones, with these two glorious jubilees. Our Western American Diocese, which turned 80 this year, will come together to celebrate these days of St. Sergius and St. John in the St. Seraphim of Sarov church in Monterey, California. I call upon all who are able to make the effort to come to Monterey for the Divine Liturgy on October 4, to take part in the procession and meal that follow, and in the general singing of the akathist to St. Sergius. Two relics will come to Monterey for this celebration: a piece of the relics of St. Sergius of Radonezh – a blessing to our diocese from His Holiness Kyrill, Patriarch of Moscow and All Russia – and the belt of St. John of Kronstadt, which is kept in the cathedral church in San Francisco.

May the Lord, by the intercession of our most-pure Lady Theotokos and Ever-Virgin Mary, and by the prayers of St. Sergius of Radonezh and St. John of Kronstadt, bless us, give us zeal, strength and love, and strengthen, unite, and increase our diocese to His glory, and the benefit of His Holy Church.

Translated from the Russian by Archpriest Michael van Opstall