The Archbishop of Canterbury met His All-Holiness Ecumenical Patriarch Bartholomew on Monday during a two-day visit to Istanbul. 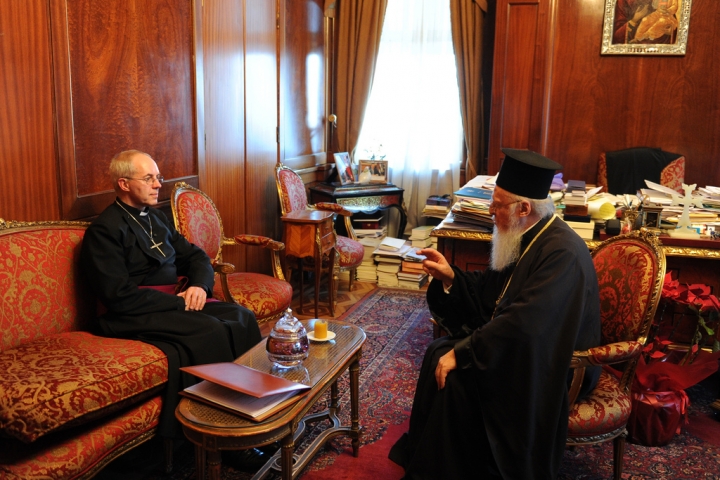 During the meeting, concerns were raised about the hardships being experienced by Christians in the Middle East.

In his welcoming address, Patriarch Bartholomew spoke of his hope to see the visit “strengthen the bond of mutual love” between the Orthodox and Anglican Churches.

“At this present moment, as Anglicans and Orthodox, we share in particular a joint concern for the situation of Christians in the Middle East, who are confronting increasing problems and, in many places, are undergoing a veritable persecution,” he said.

Archbishop Justin Welby was in Istanbul at the invitation of Ecumenical Patriarch Bartholomew, who as Archbishop of Constantinople and New Rome occupies the First Throne of the Orthodox Christian Church.

In an address, the Archbishop spoke of his commitment to the reconciliation of Eastern and Western churches.

He described Patriarch Bartholomew as “an example of peace and reconciliation, politically, with the natural world”, and paid tribute to his historic visit to the installation of Pope Francis I as an expression of this.

“Such reconciliation [is] very dear to my heart and is one of my key priorities,” the Archbishop said.

“It is the call of Christ that all may be one so that the world may see. I will therefore be taking back with me the warmth of your hospitality and also, after our discussions today and tomorrow, a renewed and refreshed focus for greater unity and closer fellowship.

“We want to carry the cross of our divisions, but be filled with the hope and joy that comes from the grace and the love of Jesus.”

A common statement issued by the offices of the two leaders described the meeting as taking place in an atmosphere of “friendship and warmth”.

The statement expressed the shared focus on “the continuation of close relations, the importance of the ongoing theological dialogue, and the commitment of the Anglican Communion and the Orthodox Church to greater cooperation for a common witness in an increasingly secular and pluralistic world, particularly in Europe”.

“They expressed concern for the injustice in many parts of the world and prayed especially for the poor, the oppressed, and those caught in war, for peace and justice in the entire world, particularly in the Middle East, but also in other parts of the globe, and for ourselves to be sustained by the help and joy of Jesus Christ.

“They further agreed to explore avenues for raising greater awareness on environmental issues as well as upholding Christian values of human dignity and religious rights.”

It was the first meeting between the two leaders since the enthronement of Archbishop Welby last year.

The two Churches have been in official dialogue since 1973 and three position statements have since been produced by the International Commission for Anglican-Orthodox Theological Dialogue.

The commission is in the process of formulating a fourth agreed statement on the Christian understanding of the human person, which will include reflections on the Christian teaching on marriage and human responsibility for the environment.

The Archbishop’s visit to Istanbul included an official reception in the Chamber of the Throne, a discussion with the Synodical Committee for Inter-Christian Affairs, and a visit to the Holy Theological School of Halki.

Archbishop Welby told Patriarch Bartholomew it would be a privilege to welcome him to London in 2015.