Archbishop of Cyprus announces his intention to visit Moscow 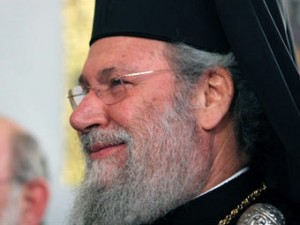 On April 4, 2013, Archbishop of Cyprus Chrysostomos II announced his intention to visit Moscow before long in order to open a new page in relations between Russia and Cyprus and to support economy of Cyprus.

At the dinner to which Chrysostomos II had invited Russian businessmen, he tried to persuade them not to transfer their capital from Cyprus, promising to make up losses by developing Cyprus’s natural resources.

The Archbishop has promised to maintain all-round support to Russian businessmen and thus to become “the second Russian ambassador on Cyprus”, reports Sedmitza.ru.