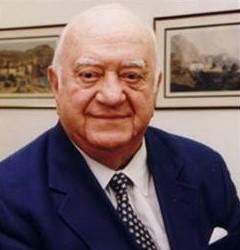 NEW YORK – Andrew A. Athens, Archon Maestor of the Ecumenical Patriarchate and president of the Archdiocesan Council of the Greek Orthodox Archdiocese for almost two decades (1974-1995) fell asleep in the Lord today March 14, 2013. He was 91 years old. Athens was the first world president of the Council of Hellenes Abroad (SAE), founder of the United Hellenic-American Congress (UHAC) and hellenicare, co-founder of Leadership 100, International Orthodox Christian Charities (IOCC), Hellenic American Chamber of Commerce, National Coordinated Effort of Hellenes (CEH) and many other philanthropic and public benefit organizations and foundations.

Upon learning the very sad news of Andrew Athens’ passing, His Eminence Archbishop Demetrios of America contacted Mr. Athen’s family and expressed his heartfelt condolences and he then made the following statement:

“On behalf of the Holy Eparchial Synod and the Clergy and Lay Faithful of the Greek Orthodox Archdiocese of America, I am offering our profound condolences to the family of our beloved and esteemed Archon and co-worker in the Lord, Andrew Athens. He was a tireless worker for Orthodoxy and Hellenism for many decades, as Archon of our Ecumenical Patriarchate, as president of the Archdiocesan Council, as World president of the Council of Hellenes Abroad and as founder, supporter and member of a multitude of philanthropic organizations and foundations. Andrew Athens was a giant and a champion of offering to the Ecumenical Patriarchate, to the Omogeneia, to Greece and Cyprus and to Hellenism in general. His passing creates a void that is hard to fill. His example of long-lasting and unselfish offering and service to Orthodoxy and Hellenism is worth emulation. May God give eternal rest to his beautiful and great Orthodox and Greek soul and may He preserve his memory eternal.”

Archbishop Demetrios will travel to Chicago to officiate at the funeral of Andrew Athens on Tuesday March 19, 2013. 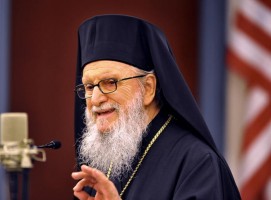