Archimandrite Christophoros Atallah: Christians are aware that they will be persecuted in this world 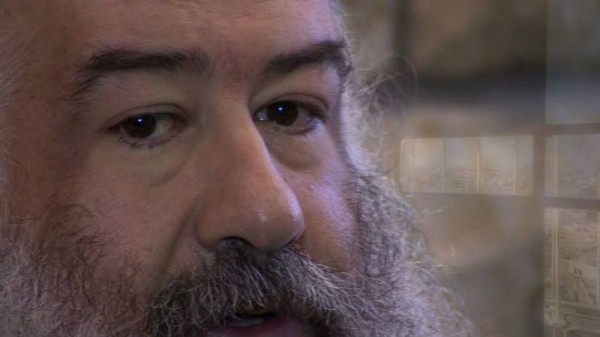 O Christians of the Middle East,

When we look at what is happening in Syria, Iraq, Gaza and many of the countries around us and the international silence accompanying it, which is more deadly than instruments of death and destruction, we are confronted with a single fact: the breakdown of the moral, ethical, spiritual and humanitarian order in our world. This is the catastrophe.

The Governor Pontius Pilate, who knew that Jesus had been unjustly handed over for death by the Jews, believed that by washing his hands before the people he would exculpate himself from the sin and crime of giving the Lord and Savior over to death. Today this Pilate-like thinking and behavior has spread and become an approach and an attitude (making an excuse of sin) as though a power that is satanic wants to replace light with darkness, truth with falsehood, religion with ignorance, humanity with bestiality, things divine with things satanic. However, beloved, no matter how much the darkness rules, falsehood and injustice spread, ignorance becomes general, the barbarity of killing and destruction grows and Satan rules the world through people whose consciences are darkened and whose hearts are filled with hate, no matter how much evil conquers, there is an end to all this history. As long as there are hearts that believe in God, that know the truth, and that live love, the the resurrection is inevitably coming.

Beloved, this is the foundation of our Christian faith, we the children of truth, life, light and resurrection. When they put Christ in the tomb, all the powers of evil and darkness that had conspired to kill and crucify him thought that the voice of truth had been extinguished from the world so that they might rule over the world. But Christ rose from the dead and put all their plans to naught. Thus we are children of hope. We hope and we persevere and “the one who perseveres until the end will be saved.”

Thus Christians are aware that they will be persecuted in this world. The reason for their persecution is that they do not accept the spirit and the mind of this world (the world of sin). Here lies the Christian’s spiritual struggle, to not become part of this world because “No one can serve two masters; for either he will hate the one and love the other, or else he will be loyal to the one and despise the other” (Matthew 6:24). Thus the Lord said, “For this cause I was born, and for this cause I have come into the world, that I should bear witness to the truth. Everyone who is of the truth hears My voice” (John 18:37).

The powers of evil in our world and Zionist interests want to empty the Middle East of Christians. This is very dangerous. It is not only because these countries are our countries, the land is our land, the holy places are are places, and we are a fundamental part of their civilization. It is also because they want to rob our countries and our people of their civilizational, religious, spiritual and cultural identity, including the culture of Muslim-Christian religious coexistence in its Eastern Orthodox dimension. Both our countries and our people are falling and being subjugated by interests that are foreign to us. Thus they bring politics of division. Despite the presence of many factors for unity that bind us together in our countries, we are unfortunately divided instead of searching for what will unite us. The choice that divides and destroys is being made. “These things I have spoken to you, that you should not be made to stumble. They will put you out of the synagogues; yes, the time is coming that whoever kills you will think that he offers God service.  But these things I have told you, that when the time comes, you may remember that I told you of them” (John 16:1-4).

Indeed, beloved, is this not what is happening? Christians are killed and persecuted in God’s name. Gaza is targeted and destroyed and her women, children and elderly are killed in the name of putting an end to terror and extremism. The sovereignty of nations is flagrantly violated and nations are displaced, killed and exterminated in the name of democracy and human rights. The truth is that those who are killing both Christians and the children of Gaza and who are displacing the peoples of neighboring countries are one. Their interests are one. Their goals are one. “Let not your heart be troubled; you believe in God, believe also in Me” (John 14:1). “Take heart, for I have overcome the world” (John 16:33). “I am the resurrection and the life. He who believes in Me, though he may die, he shall live. And whoever lives and believes in Me shall never die. Do you believe this?” (John 11:25).

Yes, Lord, we believe this. Grant us faith, hope, and love from You. Give us true repentance so that we may walk according to Your will, obey Your laws and commandments, live the life of the Church as participants in her holy mysteries and be united to You, who alone are the true God, that we may walk along the narrow path that leads to You and to Your kingdom and not be seduced by the wide and welcoming ways of this world that are ephemeral and transient. Amen.

Beloved, at this time and in these circumstances we need to enter into our inner chamber which is our heart and close its door. This takes place through preserving the purity of our hearts from the falsehoods and filthiness of this world. We must pray to “Our Father who sees in secret and who repays us openly” (cf. Matthew 6:6). Only then will we be able to hear without distortion and listen to the voice of God. This also takes place through our repentance and persistence in receiving the Eucharist and participating in the sacramental life of the Church. Then we will be able to discern, through the blessing of the Church and the spiritual father where to direct ourselves and what to do in difficult circumstances, so that we will not lose our life’s true compass and so that we will remain witnesses to the truth in our Holy Land where we must remain and not flee, in order to work for its unity and flourishing. We must follow the moderate Hashemite program of establishing the spirit of love and brotherhood, of deepening dialogue, of thinking [tafkir] rather than takfir, of lifting high the word of truth in order to live in dignity. We must likewise work persistently to hold on to  and defend our national and ecclesiastical rights, no matter the obstacles that face us, demanding that we compromise our legitimate right to establish the State of Palestine with its capital in Jerusalem and a revival in our national Orthodox church through the participation of the people of this country in managing the affairs of their church and preserving a living Christian presence in our Holy Land. We will assert these just and legitimate rights, no matter what price we have to pay, because every person who holds on to his right and demands that it be realized contributes to the spread of love, justice and divine truth against the falsehood and hatred spread by the powers of evil in our world. It is the responsibility of every person to contribute to saving humanity from destruction and the decay of human, moral and spiritual values.

We lift our prayers to the Lord God for the martyrs of Gaza, Iraq and Syria, for the healing of wounds, for the release of Metropolitans Paul Yazigi and Youhanna Ibrahim who have been kidnapped for more than a year and a half. May the Lord preserve for us the grace of security and stability in our Jordan and preserve our beloved nation from all enemies, seen and unseen. May He grant His grace, blessing, and strength to the fearless Arab army that protects it and to all the security forces that keep watch over the security and stability of the nation under the leadership of His Majesty King Abdallah II, may God preserve and guide him.

May the grace of our Lord Jesus Christ, the love of God the Father and the communion of the Holy Spirit be with us all. Amen.

Translated from the Arabic