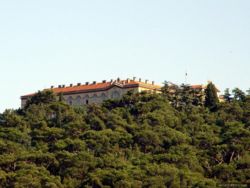 Archon Congressman Gus M. Bilirakis (R-FL) and Congresswoman Carolyn Maloney (D-NY), Co-Chairs of the Congressional Caucus on Hellenic Issues, introduced H.Res. 188, calling on the government of Turkey to reopen the Ecumenical Patriarchate’s Theological School of Halki without conditions or further delays. This resolution was first introduced in the 112th Congress and passed through the House Foreign Affairs Committee with unanimous consent.

Archon Congressman Bilirakis: “I once again join my colleagues in the House in calling for the immediate reopening of the Theological School at Halki without preconditions. The Ecumenical Patriarch, as the leader of nearly 300 million Orthodox Christians, has a record of reaching out and working for peace and reconciliation among all faiths and has fostered dialogue among Christians, Jews and Muslims. All we are asking is that Turkey be required to abide by its constitution, which secures religious rights for all of its citizens and institutions.”

Congresswoman Maloney: “Turkey is overdue in recognizing the Ecumenical Patriarchate’s international status and allowing the reopening of the Theological School at Halki. They must make good on their promise to show it is serious about the rights and freedoms of religious minorities.”