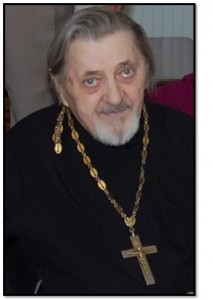 On Friday, August 23, Archpriest Vladimir Doroshkevich, longtime cleric of the Eastern American Diocese, reposed in the Lord. He was 94 years old. Fr. Vladimir’s clerical service lasted over 65 years, which he spent in various parishes of the Church Abroad. From 1986 to 1993, he was rector of St. Andrew’s Church in St. Petersburg, FL, and from 1993 until his retirement in 2009, he was rector of Sts. Cosmas & Damian Church in Passaic, NJ. After his retirement, Fr. Vladimir moved to Poland to be with his three daughters and son (Archimandrite Barsanuphius of the Polish Orthodox Church), where he reposed.

Most viewed articles
On Why We Must Reproach Ourselves112
Look What I Have Done!108
Metropolitan Hilarion Visits a Russian Church under Construction in Cyprus97
A Regular Session of ROCOR Synod of Bishops Held in New York86
The Healing by the Pool of Bethesda77
Metropolitan Hilarion of Volokolamsk meets with Archbishop Chrysostomos of Cyprus76
Church of Martyrs and Confessors of Communist Prisons to be consecrated in Târgu Ocna57
Patriarch Porfirije: There is No Peace without Peace with God and the Desire to Live According to God’s Commandments48
Metropolitan Hilarion meets with leaders of a major inter-Cristian humanitarian organization47
Life Savers9
Most popular authors
Pravmir.com team354
St. Dorotheos of Gaza112
Fr. Stephen Powley108
Fr. Theodore Stylianopoulos77
Ștefana Totorcea57
Archpriest John Moses (+2019)9